Oh boy, my favorite pack finally arrived! I’m sooooo happy Stuff Packs return to The Sims 4 after 1,5 year of not having one, and then they went for this specific pack as THE comeback. What an amazing choice! And if you can’t detect my sarcasm yet, I recommend you read my article “Five reasons why the Moschino x The Sims collab SUCKS!” first and come back to this one when you’re done. But let’s keep an open mind going into this and give The Sims 4 Moschino Stuff the benefit of the doubt.

This review was sponsored by EA, however opinions given are my own honest, unbiased thoughts on the product.

When I first jumped into CAS my heart skipped a beat and not in a good way. I said I would be openminded during this review, but why is this pack making it so hard already?! Look, I get it. Not everyone is going to like high end fashion and that’s fine, but as I’m here to review it I’m going to give my personal opinion on it.

The Create a Sim items of the Moschino Stuff Pack are really something else. And you either like them or you hate them. I mostly hate them, but I would be a liar if I said I did not like any of it. The leather jackets for feminine Sims look pretty decent and I LOVE the boots for masculine Sims. Further I like the plumbob earrings, even though I think Sims should not be aware of their plumbobs as it is what controls their mind.

However, when we take a look at the more… *cough* unique items, I could not help but laugh and cry at the same time. Fashion statements are usually over the top, but what is up with the clown-like designs?! Or the teddy bears for that matter. Like… why?! 2013 Miley Cyrus just called and she demands her bears back! The suit for masculine Sims is utterly over the top too, but at least that one did not give me pink eye just by looking at it.

Watch our complete overview of the Create a Sim items 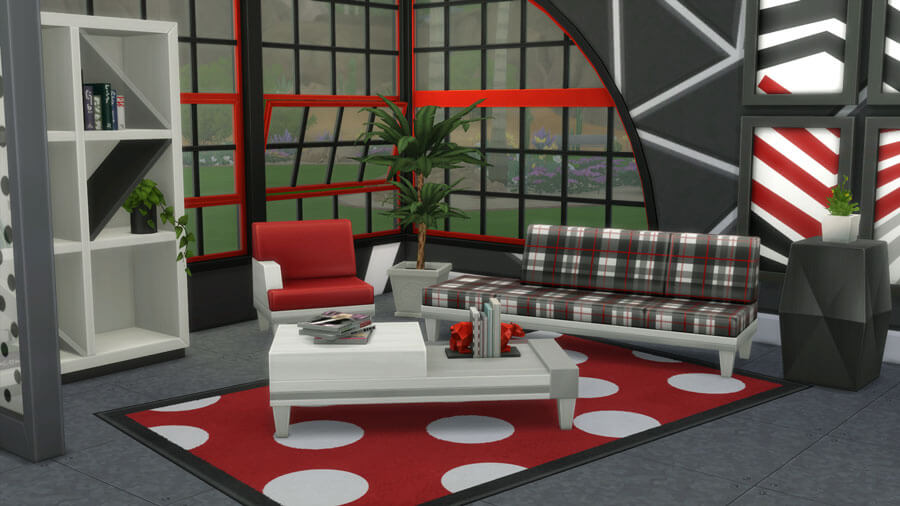 Create your own studio with Build & Buy

Surprisingly enough I did really enjoy the Build & Buy mode of The Sims 4 Moschino Stuff. The colors and patterns are often “in your face’, but I did not expect differently from a Moschino pack. Although many objects come with very artistic designs, there is a nice balance between loud and neutral choices. The furniture will be amazing in your Sim builds if you want to create a living space with a modern appearance.

My favorites of Build & Buy mode must be the big industrial windows. I really liked the details of the slightly open windows and the rounded. These are just perfect for a loft or penthouse. Together with the other objects like electronic backdrops and decorational camera equipment, you can create amazing studios for your photographers and artistic Sims.

Watch our complete overview of the Build & Buy items 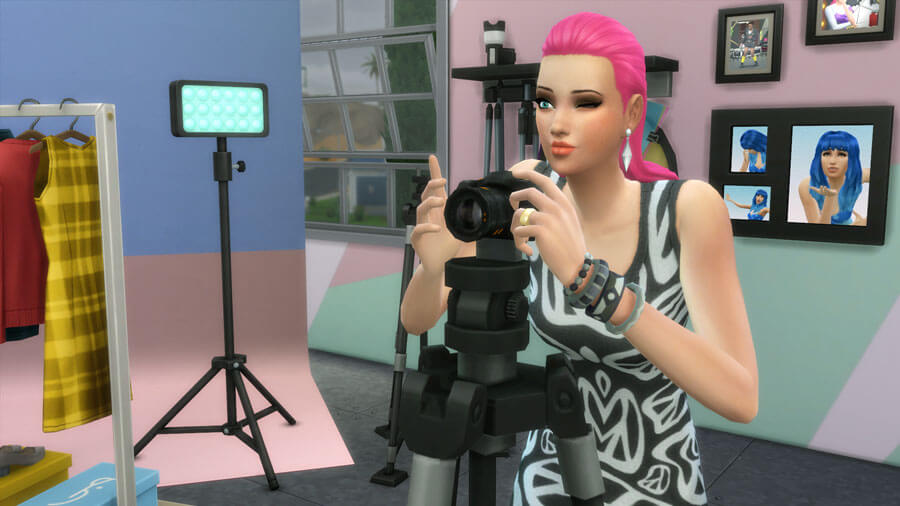 Photography finally got the makeover it deserved, but weirdly enough it is hidden behind yet another pack. While photography originally came with The Sims 4 Get to Work. The skill and cameras were later moved to the base game, excluding the In a Flash Studio, but other than that everyone could excess taking photos. Back then I found this to be a reasonable choice as you could take pictures with your Sims’ phones anyways and as it was quite a simple skill, I did not care much for it.

However, this time around I can’t help but to get a bit irritated. Sure… a pack surrounding fashion should have gameplay involving the industry that goes behind a high end fashion brand. But to lock a part of the gameplay, which happens to be the best part too, from an already existing skill when it FINALLY gets an overhaul… That’s just a lame move to bribe people into buying the pack which I can not stand behind.

Don’t get me wrong, I really enjoyed that photographer is now an actual career path and I highly recommend you check out our guide for it. The career is fun and the different gigs make it enjoyable to play for a longer period of time. But why not go for modelling instead? In that case it would have been questionable if that should be in The Sims 4 Get Famous, but still… It would have been original content!

So is the The Sims 4 Moschino Stuff trendy or not?

To answer the question if this pack is worth your money would be difficult. At its core, this pack comes down to personal taste; you either will hate it or love it. While for me the pack would not be worth the 10 bucks, I would gladly have payed half the price for it even if it was just for a good laugh. Let me explain why.

While the Create a Sim is very scarce, I really enjoyed myself taking silly pictures with it. Some of the pieces might not be for everybody, but they do help create a sense of luxury in the game. And then I’m not talking about the terrible lucky bunny or llamacorn crap, that t-shirt can go straight in the bin. So if you have a fashion sense Pennywise would kill for, then the CAS of the Moschino Stuff Pack might be the thing for you. 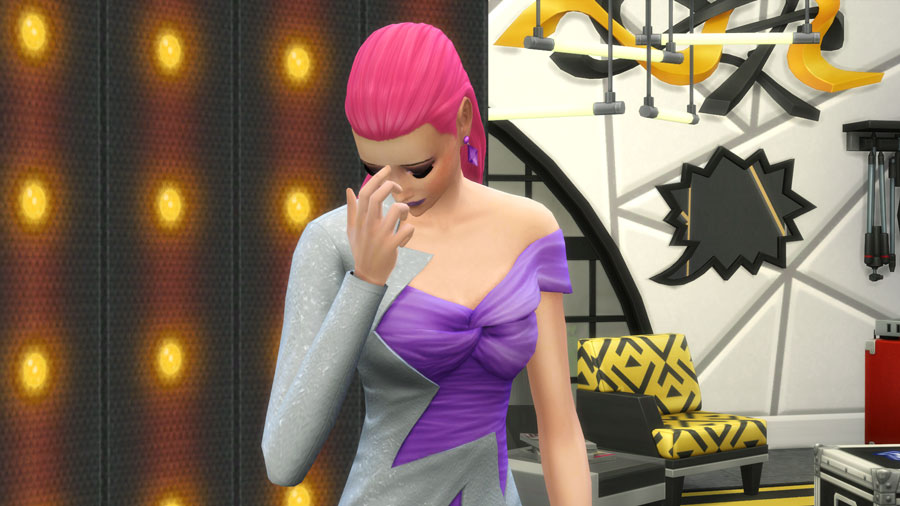 There aren’t many items in the Build & Buy mode, but the ones we did get are pretty good. The items like the bookcase or picture frames would look great in any house and the themed objects are perfectly suitable for their purpose. Why we got a guitar amplifier in a fashion related pack beats me though. Even the description says it’s only there to look pretty. Oh well…

The gameplay of The Sims 4 Moschino Stuff is the biggest selling point for me, but it’s also its biggest flaw. The gameplay that came with the pack shouldn’t be in a pack, but rather a free update. It’s building too strongly on what was already there, making it feel like a rip-off when they made it pack-exclusive.

All in all I’m still not convinced of the Moschino x The Sims collab. The pack was not as bad as I thought, but if you take away the recycled gameplay there’s not much left. After the 1,5 year absence of Stuff Packs I expected the first new one to blow my mind and it simply didn’t. I honestly enjoyed My First Pet Stuff more. Heck, even Katy Perry Sweet Treats for The Sims 3 was better than this! It’s just bad advertisement, and I watch Netflix for a reason. NO ADS!

Create a Sim3.7
Build & Buy6.3
Gameplay8.5
6.2 out of 10
Misstory
Previous ArticleBecome a Freelance Fashion Photographer in The Sims 4Next ArticleThe Sims 4 University might be up next!