Okay, it is time to spill the tea. It has been a while since The Sims released their collaboration with a luxury fashion brand from Italy, Moschino. While I’m usually not one to complain about free content, I can not let this one slide as the whole thing just feels utterly ridiculous. The more I saw the sweater appearing in my game, the more it annoyed me. Here is why. 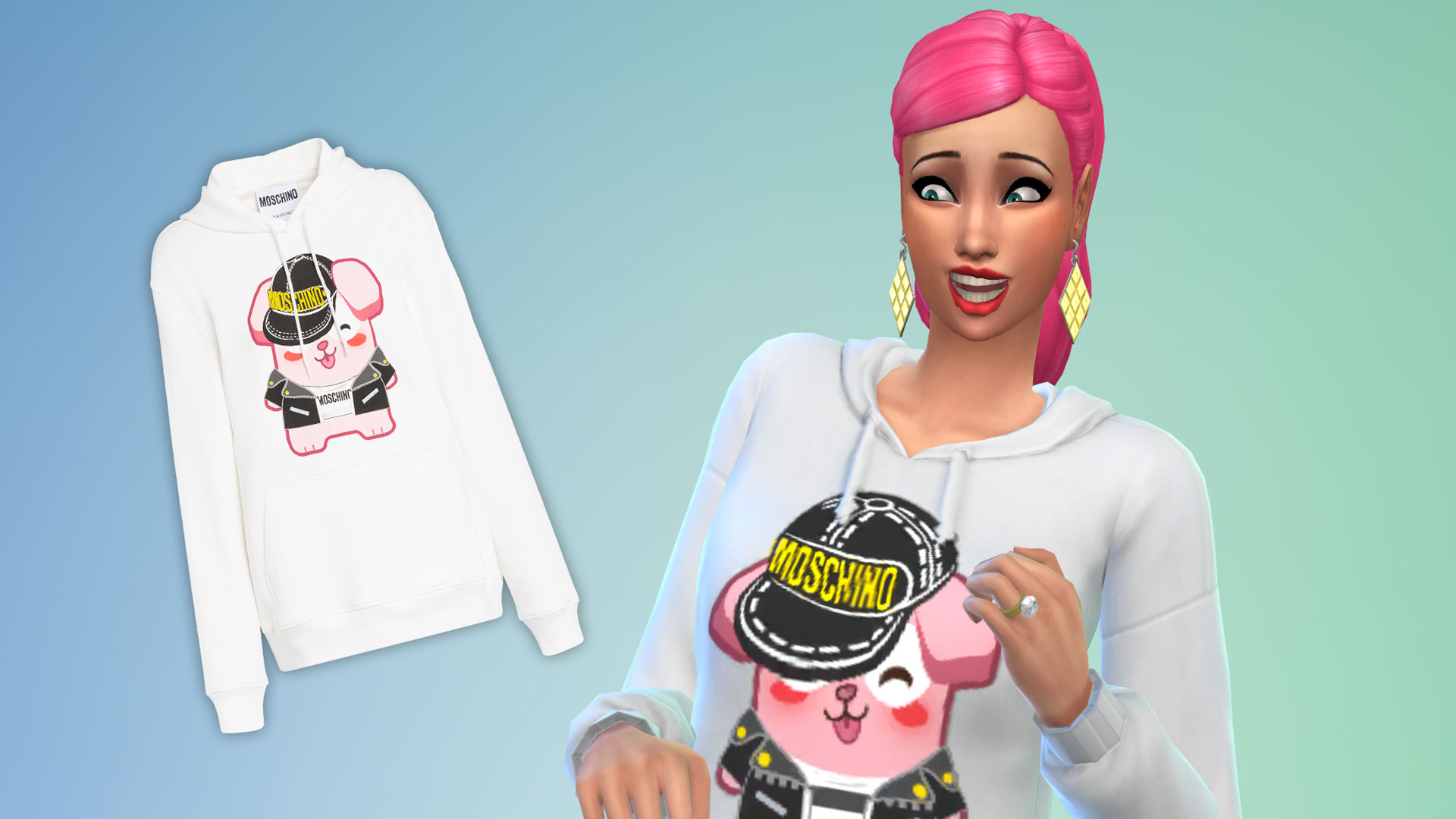 1. Your Sims are a walking #ad

Now don’t get me wrong. I get that a brand such as Moschino needs some recognition in the game for the whole collab to make sense. As Create a Sim items don’t really have a description I understand that they wanted their brand to be represented properly somehow. But why make it so obvious? I mean, they literally sell the same sweater in their own collection… I think people will be able to make the connection.

While I get that a lot of fashion has huge branding on it, the Moschino sweater just doesn’t look right in The Sims 4. Logos in The Sims 4 have been subtle, blending right in with the rest of the graphics of the game. EA even made up a fictional clothing brand which was first seen in The Sims 4 Fitness Stuff and has returned in several other packs since then. Now I’m afraid to post a screenshot of my Sim wearing the Moschino sweater without writing #spon and #ad in the description.

It’s not so much the sweater itself, but more so the print on it. Honestly, I actually really like the longer design of the sweater. It’s just that the print feels a bit… meh. I think we can all agree the Freezer Bunny looks very adorable, but the text saying “Moschino” simply doesn’t suit the game, unless you might be into Alpha CC. Other than that it plainly looks out of place and it probably would have looked a lot better written in Simlish.

2. The designs don’t fit The Sims

If you look at the items from the Moschino Capsule Collection it is actually pretty hard to tell that it is in collab with The Sims. There are only a handful of items that make sense for a Sims collection and even these items feel mediocre. “Just plop on some plumbobs and we’re done!” well sorry, but that’s not how it works.

A fake leather jacket (don’t be fooled it’s only a shirt), a pair of leggings with drawn-on details, a tank top with fake necklaces on it; All designed with a pixelated look to make it relatable to a video game. But why? Nothing even reminds me of the current The Sims games in the slightest. So unless it was meant as a throwback to The Sims 1 graphics the pixelated details feel out of place and uninspired.

Talking about uninspired. Let’s take the Uni-lama design for example. Where in the Sims did we ever get a Uni-lama? Sure, I guess The Sims has a lot of llamas and there were unicorns in The Sims 3… But come on! “Oh unicorns are kind of popular these days and I guess The Sims has a llama meme going on so why not combine them?” It’s like they’re trying to make an inside joke, but the only ones who are in on it are Moschino themselves. Awkward. 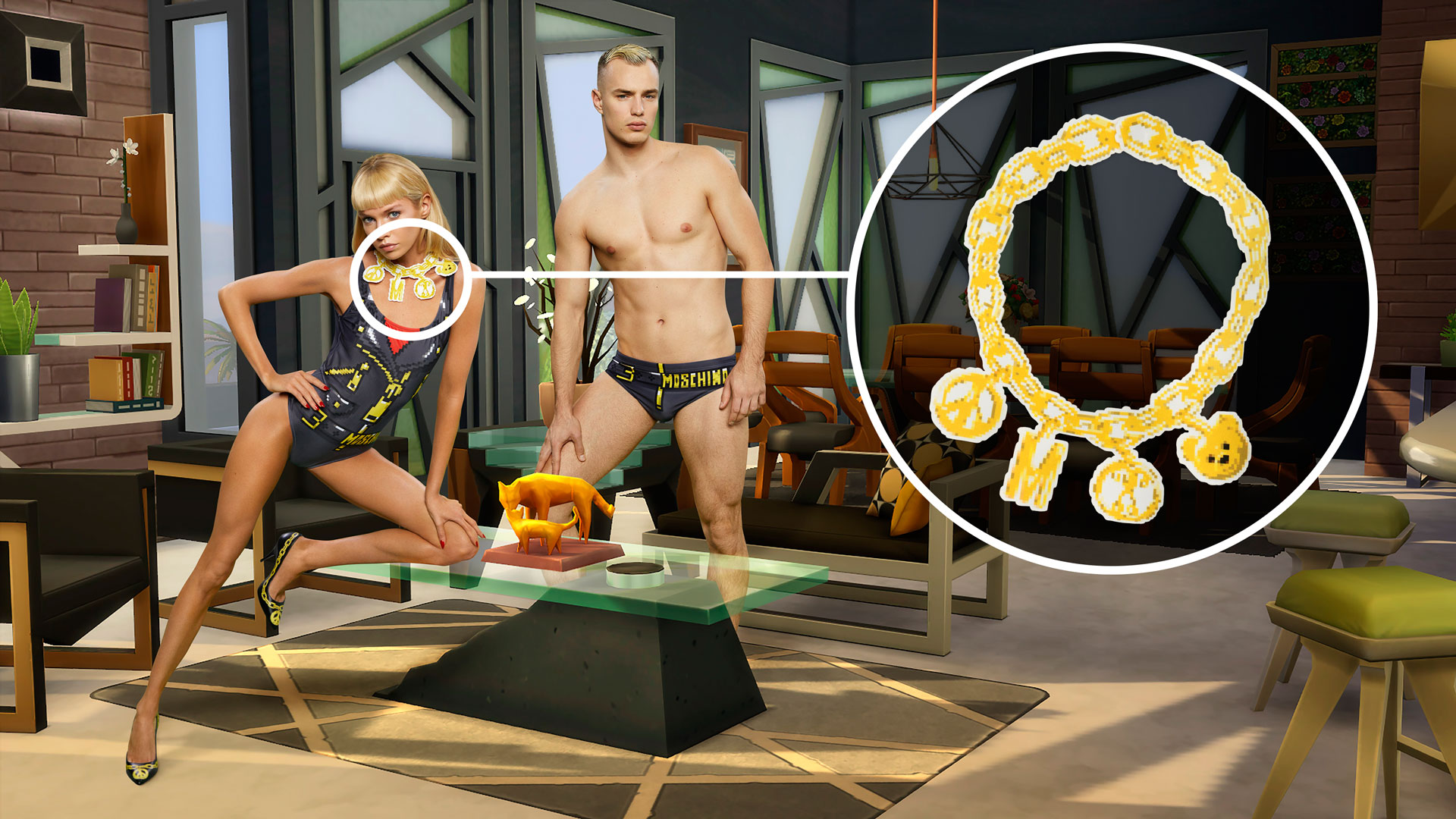 3. Moschino is way too overpriced

Of course I can’t speak for the entire playerbase, but for the most part I think the demographics of The Sims and Moschino have little to nothing in common. Apart from some fashionista’s who also happen to love The Sims, I think there aren’t a lot of Sims players who are comfortable paying almost $300,- for a simple shirt. In general the average Sims player will never be able to afford (or willing) to purchase Moschino clothing.

Normally I am pretty forgiving in my reviews as I acknowledge the fact that there are actual people who worked hard on the thing that I am reviewing. But honestly… With the whole Moschino x Sims thing it’s just too hard to say something nice about it. I mean, if I’m going to pay $250,- for a necklace you better believe it will be actual gold and not that RUBBER crap that they’re trying to pass on as jewelry. Noooo, thank you.

4. The collab is mismatched

So what are Simmers getting out of this collab? Not much. The patch added one unisex shirt and that’s it. As I said in my first point, the shirt isn’t even that amazing either. So while it is great press for two big names to work together, sometimes it’s simply a better idea to skip a brand deal for once. And I think this was one of these times.

Please don’t get me wrong. If the Moschino Capsule Collection was released without the collaboration with The Sims I probably would have enjoyed the designs a lot better. I most likely still wouldn’t understand the pricing, but hey, to each their own. Fashion brands are known to be expensive so I could forgive them for that. Right now it is as if Moschino got way more out of the collab than The Sims. Obviously I don’t know the exact details of the financial benefits of this collab, so I might be wrong about that.

5. Moschino does not get The Sims

To prove my previous point even further, let me explain to you why Moschino just doesn’t get The Sims and why they should never have worked together. It doesn’t really feel as if Moschino understands what The Sims is about. Calling the iconic Freezer Bunny “Lucky bunny” instead just shows how little they care. They have since then changed the article names, but it only after complaints about the name.

To complain about a silly article description might seem a bit pity, but it’s more what it represents towards the Simming community. “We don’t care about your beloved game, we most certainly have never played it and quite frankly we don’t give a crap if you think the designs have nothing to do with the actual video game. But please, buy our overpriced rubber necklace that has literally no connection to your favorite game!” Yeah, it just doesn’t sound very nice, now does it? This whole collab is a big MoschiNOPE for me.

So what did you think about the Moschino x Sims collaboration? Feel free to leave your opinions on the collab in the comment section below!