With all the new technical features coming to The Sims 4 Island Living, it was just a matter of time for a pre-Expansion patch to be announced. The new update comes with great new features as stilt foundations, new lot traits and an trait randomizer in CAS!

Yes, you read that right. A whopping 350 new swatches are added to the game. And it is a door only update. It seems like a silly update, but its very useful for builders! Things actually match now, which is a great thing for players who like a house that looks more put together.

Watch our complete item Overview of the Pride Month patch!

Pride Month collaboration with It Gets Better Project

There are a few new items in CAS to show of your Pride and I was pleasantly surprised the shirts are available even for Kids and Toddlers. In Buy mode you’ll find a new wall-mounted flag in various representation of the LGBTQ+ community. Before the release of the patch, we could see that the SimGurus had forgotten to include the Lesbian flag by accident, but they quickly went out of their way to include it before the patch actually launched.

THE SIMS X IT GETS BETTER PROJECT IS HERE 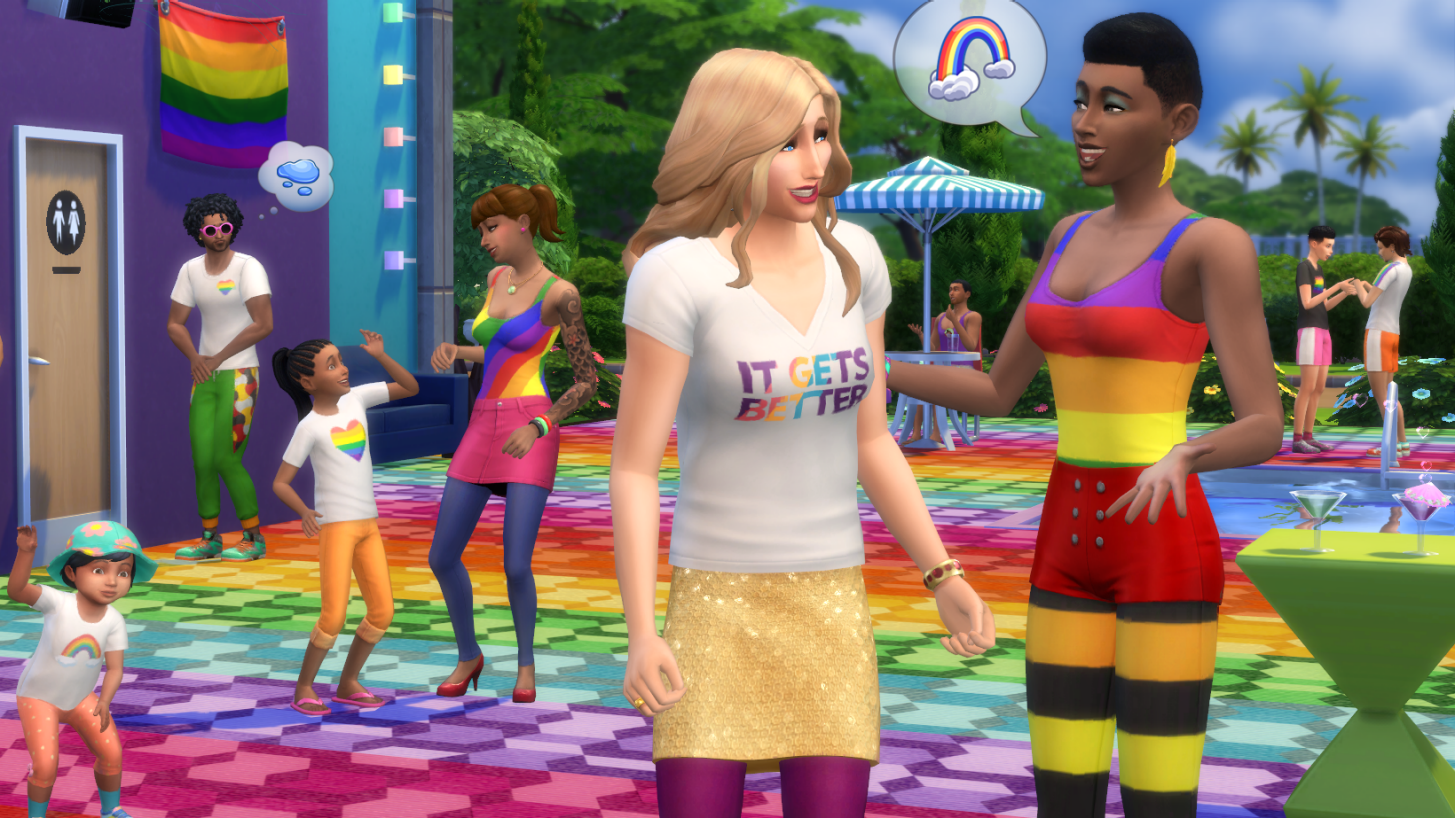 Hey, Simmers! We’re delighted to announce a very special The Sims™ 4 Pride Month collaboration with It Gets Better Project.* Starting June 18, 2019 on PC, your Sims can celebrate with:

You can also grab in-game Pride clothing in The Sims Mobile and a rainbow flag t-shirt for teens and adults in The Sims Freeplay! Read the official blog

Is it hot outside, or is that just my gland problem? Anyway, let’s not worry about that – we’ve got some awesome new stuff to talk about! With all this Summer heat and with Sims 4 Island Living’s release just around the corner, we’ve got a few new free updates we are so excited to share with you! So let’s slap on some sunglasses, squeeze into that swimsuit, and dive on in…

A Randomize Traits button has been added to CAS and in the Live Mode Age-Up Molecule. Oh yes, it’s now just right there, waiting to be clicked. Over and over and over and over. I can’t really believe it either, but here it is. The dark days without this small hero are now just a distant unpleasant memory. From here on out, if you just want to grab-and-go your Sim’s personality and get the heck outta CAS, or if you want to add a little challenge to who your Sims might be, it’s just one click away. Jeepers, this feels good. Seriously, I’ve been wanting this forever.

Everyone (even you) gets a FREE LOUNGE CHAIR! That’s right, we’ve added a delightfully Portable Lounge Chair, so you can now lounge by the pool the way you’ve always wanted: Laid back. With your mind on your Simoleons and your Simoleons on your mind.

Show your pride with some fantastically colorful new clothing. The rainbow leggings are my personal favorite. Nah, maybe the body suit is my favorite. But now that you mention it, I can’t stop dressing my Sims in the new t-shirts — created in partnership with the It Gets Better Project — so I guess I just love it all! In addition, we’ve also included a selection of decorative Pride flags for hanging on your Sims’ walls. Finally, we’ve updated our bathroom door sets in-game so that every bathroom door also includes a gender-neutral version for builders, and includes a full suite of color swatches for mixing and matching to your heart’s content. Happy Pride Month, everyone!

Or as I like to call them, High Heels for your House. Or House Heels. These things don’t need to be limited to just the tropics. Stilts are a great partner in crime to manipulated and flat terrain alike in any biosphere. You can find them in Build Mode alongside all the other regular Foundation types. Now go get your stilt on.

Now you can pull your Eaves… further.

Ok, we may have gone a bit overboard here… There are 350 new color swatches spread across all of the doors and arches in the base game catalog. If you’ve ever wanted matching doors in Light Brown, Reddish Brown, Brown, Dark Brown, Gray, White, or Black, then this is certainly the update for you!

We added some L’il Swimmies Splashy Diapers! You don’t necessarily have to use them for splashing in the water, but that’s where our brains were at when we made them. We made these not only in anticipation for Island Living, but we also thought you’d appreciate more swimming options for your toddlers to use in the Seasons Kiddie Pool.

A new Back Float interaction is available for Sims swimming in the pool. Click on that water. Try it out. Take a load off.

Brace yourself, we’re about to cast you into a deep dive…

Ceiling Fans will now cool a room if you have Seasons and the fan is on. Oh yeah, speaking of which, we also added the ability to turn them On and Off. And while we were at it, we figured we’d make them dry off damp Sims too.

There is now a chance for interesting things to happen to your Sims while swimming, like getting a cramp or losing their suit (eek!). Swimming also now gives your Sims a boost in Fitness skill gain.

And last but not least (you still with me?) all existing Part-Time Jobs are no longer just for Teens. That’s right, now elders could work as Fast Food Employees. Young Adults could be Babysitters if they want. Why not? The Part-Time world is your oyster. Oh oh oh — and one last thing on that note: You can now have two Part-Time Jobs at once and pick between shifts. Wowee.

And now on to the unintended features…

And now to wrap it all up, let’s get playing! I hope you enjoy your summer updates and have yourself one wonderful day today.