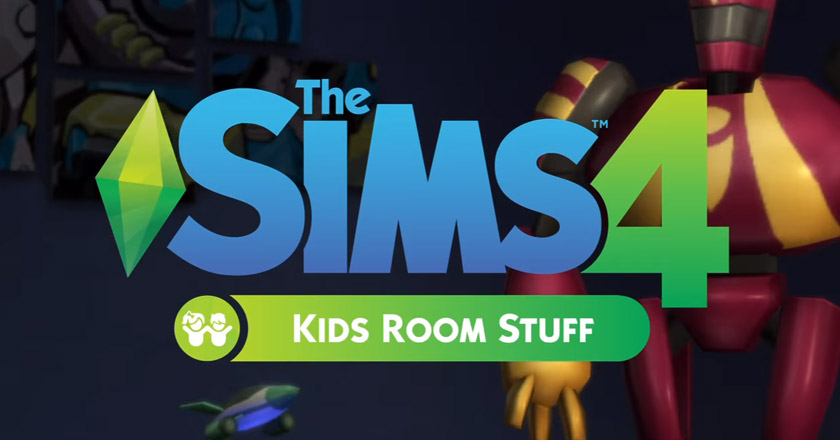 It’s finally time for Sim Kids to take their rooms to the next level with the all new The Sims 4 Kids Room Stuff Pack releasing June 28!

Kids will get to deck out their room with all new furniture, posters, and other items to make their digs their own. But that’s not all! Kids can take their imagination to new heights with two new game play objects, Monster Battle Station and the Puppet Theater.

Kid At Heart? Check Out The Sims 4 Kids Room Stuff!

Childish Sims and Simmers rejoice; The Sims 4 Kids Room Stuff* is arriving on June 28th, and it’s all about giving those little rascals more to occupy their time.

A child Sim can put on a performance in the Puppet Theater to help with their social development, they can stoke their competitive fire by challenging their friends at the Voidcritter Battle Station, and they can go out exploring in the world to discover and acquire the new Voidcritter collection.

…hold on a second, a Void-what? Voidcritters! As the story goes, these cute and occasionally ferocious monsters are mysteriously appearing in your Sims’ world, and it’s up to the children in your family to capture, collect, trade, and train them. Voidcritters are a brand new collection of twenty collectible (duh!) cards, which can be battled against each other in the Voidcritter Battle Station. Each competitor inserts their critter’s card into this electronic arena, and the digital screen springs to life as kids attempt to button mash their way to victory while the battle unfolds. This collectible card game is unlike anything you’ve ever seen in The Sims before.

Children will also find the Puppet Theater waiting for them when looking for an amicable social undertaking. In another first for the franchise, friends and family will gather around as your child Sim puts on the performance of their lifetime. When the curtain rises, a variety of stories can unfold… will two friends lost in the woods make it back to safety? Will a monster with razor sharp teeth find living arrangements in a suburban family’s home? Will the dastardly deviant that stole a notebook be brought to justice by the school’s private eye? Five plays in total are unlocked as a child raises their social skill, and each one is positively adorable to watch as it’s acted out.

To complete the experience, we imagine you’ll want to do some renovations to your kid’s rooms, as well as a wardrobe overhaul to set the right tone. You’ll find that objects are aged up in style from the primary shapes and colors that adorn the existing kid’s furniture; the content in this stuff pack helps children start to define their own space. Clothing is similarly expressive and unique, with patterns, logos, colours, and fashions that help tell the world who they are and what they like. Finally, what better way for kids to pass idle time in their room than listening to the new Tween Pop radio station, or watching the new BEtween TV channel.

For the young Sims in the game, or those Simmers who are just young at heart, there’s plenty in The Sims 4 Kids Room Stuff to put a smile on your face when it launches this June 28th.