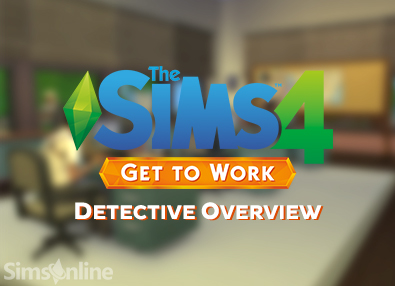 The Sims 4 Get To Work expansion pack recently launched in Northern America for the standard price of $39.99 (view a full list of prices here) and many fans were eager to get their hands on the new content that Get to Work had to offer. I luckily received the opportunity to get my hands on this product and I can proudly say this is one of the best expansion packs EA have ever created for the Sims series and I definitely suggest that you take into consideration purchasing this game. If you’re still uncertain, read on!

When I first loaded up the game and the introductory music began to play, I did a slight dance in my chair due to the anticipation of finally being able to play this game after months of waiting. I had not watched any YouTube videos or read any reviews of simmers playing the game so it was the first time witnessing the game in action. Despite my hunch to leap straight into the game, I decided to enter Create a Sim.

After creating my sim, Adam Moore, I quickly navigated towards the gallery and downloaded a starter home and simply plopped it on the piece of land I had purchased as I was eager to delve deep into the gameplay of the Detective career. After getting all set up and enrolling in the career I allowed my sim to do as he freely wanted before finally going to sleep.
Morning quickly arrived and my sim leaped out of his bed and sought to his needs before a window suddenly prompted me with the choice of going to work with my sim or staying at home and allowing him to do his own thing. Of course, I chose the first option. I am greeted with a short loading screen before arriving at the police station in my Cadet uniform. Upon arrival, a content box pops up which says:

Assist with a Crime Scene Investigation
You need to learn the ropes before you can handle running your own case. You’ll start by assisting a veteran detective with a crime scene investigation. Use the Crime Map to travel to the crime scene.

Therefore, the first thing I had Adam do was locate one of several computers and request to be assigned a case. Instantaneously, Adam is assigned a case and walks over towards the crime map to travel to the crime scene.
[alert class=”alert-info”]Tip: Career related interactions can be identified by the police badge image in the interaction bubble.[/alert]

Upon arriving at the crime scene, detective-ish (best word to use) music began to play as a quick debrief of what I should do whilst my sim was there popped up on the screen.

Crime Scene
At a Crime Scene, you can find clues that will help you track down a suspect.
Investigate damaged or stolen objects and Search for Clues on the ground nearby to uncover more evidence.
Also, talk with Witnesses to get a report about what happened.

In the top left corner of the screen, a box, much similar to party tasks/goals, popped up listing things that you can do on scene. The top of the box stated the time of which your sim leaves work to go home. Beside this, there is a clock. If you click this clock, you are prompted with the choice of either staying late or going home early. If you decide to stay late, you remain at work for an extra two hours. If you do decide to go home early, you are prompted with a warning that you will receive a penalty if you proceed to do so. Below this you can find the tasks that you are set in order to complete the work day successfully. If you hover over the task a more detailed explanation pops up on how you can complete it.

Once you enter the lot that the crime took place on, you should notice straight away some greyed out/transparent objects. These act as clues and when you proceed to click on them, you a prompted with a series of options such as: Take photograph for evidence, Dust for fingerprints and a few more. You can also click any area on the ground and receive on option to search for clues. This will result in your Sim inspecting the area around him in search of clues. You may need to do this a few times in different places for clues to pop up. You may also take a witness report. You can tell if a Sim is a witness or not by hovering over them. In red text, it notifies you what the Sim is; in this case, a witness. This also applies to Sims around the Police precinct, showing what rank they are or if they are an inmate or not. 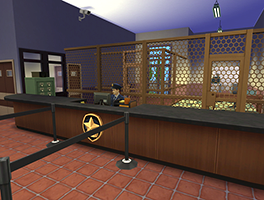 Once I decided to return to the station, immediately the tasks changed and I was asked to use the Chemical Analyser to analyse the evidence I had collected at the scene. This is quite time consuming and it does take a while to get through each piece of evidence as you do have to do one piece at a time. Although, I believe the results are concluded for all the evidence after one analysis is completed, although I am uncertain. Once this is completed you file the evidence in the computer for the senior detective to follow up on and complete the case.

The sun rose once more as it will continue to do for many years in our Sims’ lives and Adam went straight to work again. Today his work day entailed doing a little more work around the station and out in the towns instead of being focused on just one case. Once I arrived at the station once more, I was pleased to hear the constant sound of radio chatter in Simlish. This really added to the Police Station effect and made it seem much more like the real thing. Just a small aspect that really made me happy for the game.

One of the tasks that my sim was greeted with was going out on patrol on the streets. Of course as expected I hit a brief loading screen before being teleported into a random area throughout the districts: Oasis Springs. Pretty much straight away a sim started to throw a hissy fit and started a fight in the middle of the street with another sim. I strutted over to them and issued both of them a citation: one of my tasks. Another of my tasks was to chat with civilians and so I completed that and then returned to the station. 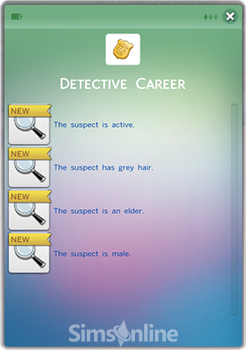 Once I arrived at the Station a prompt popped up notifying me that enough evidence had been collected and along came an appearance description which was then stored in the notebook on the mobile phone. I was then notified that I could post an APB (All Points Bulletin) by interacting with the Crime map. After doing so you travel to the area where the suspect was spotted and you have to try and figure out who the suspect is. You can ask other sims if they have seen a sim matching the appearance and they point in the direction they last saw the suspect, if they saw them at all.

If you accuse the wrong sim of the crime, you will be notified of this and will receive a small performance decrease. After finding the correct suspect, you slap cuffs on them and take them to the station. You are then able to fingerprint, photograph, interrogate and search the sim in question before throwing them in the cells.

At the end of day two Adam had received a promotion to Officer. The Sims 4 Get To Work offers so much great content and this is just a small chunk of it. I found the Detective career extremely entertaining and I was simply fascinated by the amount of content, interactions and features available in this expansion pack. It has set a high standard for future expansion packs that I feel EA will meet.

If you would like to purchase the expansion pack you can do so by clicking here. The game releases on 31st March in Northern America and on 2nd April in Europe and the UK.

Previous ArticleUnlock The Sims 4 expansions earlier in your countryNext ArticleThe Sims 4 Get to Work Broadcast Tomorrow!