Baby, it’s cold outside! At least for some part of the world… You get what I mean, right? Anyhoo, another patch just released for The Sims 4. Not only does this update include the needs to prepare for The Sims 4 Discover University (coming November 15th), but it also has a few new freebies for younger Sims in the 2019 update of the Holiday Celebration pack.

A new building mechanic has been added to the basegame. You can now resize columns to adjustable heights, meaning you can use the same column on multiple stories of your building. Some of the columns remain somewhat of a height restriction. From what I’ve seen this is mostly to keep their design in tact, rather than to stretch it to oblivion. These columns are labeled with a blue arrow in the bottom right corner of the icon.

Other than that, you can also adjust the size of your User Interface (UI) in the options menu in the new Accessibility tab. Here you’ll find a new option to downsize and upsize your UI however you see fit, making it more comfortable for all screen sizes. 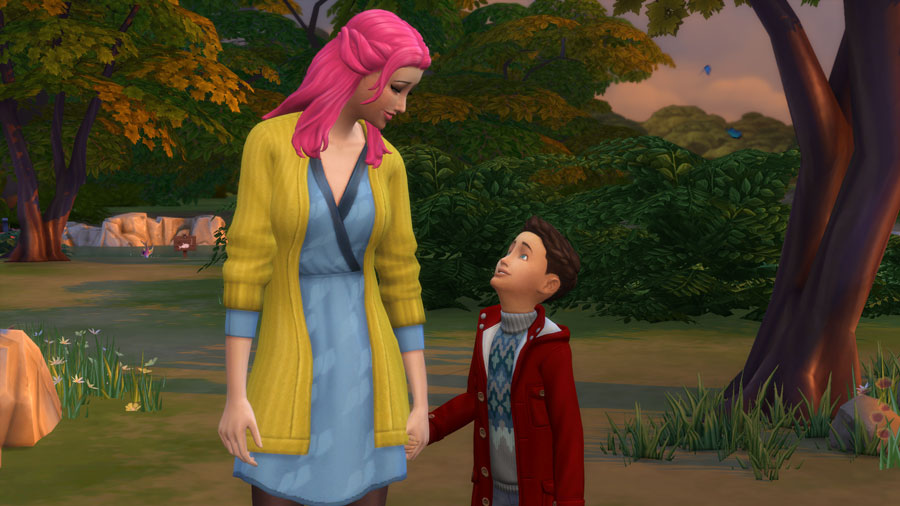 It is time to update the Holiday Celebration pack for The Sims 4. Don’t want to miss out on the new content? Just make sure to add it to your account as this pack is free for everyone.

This years’ update includes items only for CAS (sorry builders) and more specifically for kids & toddlers alone. While the new clothes and shoes don’t necessarily scream “holiday” to me, the items are very good choices for the cold weather outfits of your Sims. And besides that every new addition to the game is welcome.

Watch our complete Overview of the 2019 Holiday Patch

Happy Fall! We have a few new Holiday items available for you in Create A Sim to celebrate the holidays. Along with that a new Multi Story Column feature to help you build tall columns for a grand entrance or interior. UI Scaling is also available in the options panel to give you more options with our UI configurations. Want to know what Sims 4 content is out there? New Main Menu Message is now avail on load to easily help you find the latest and greatest content from The Sims 4. In addition, we’ve fixed bugs and community concerns to improve your Sims daily lives.

I’m not sure calling them multi-story columns is accurate. They are more like multi-height columns. Just go into the build catalog, place a column, grab the handle at the top, and drag it up and down to re-size. Some have a maximum size, others however… I think I topped out around 100 feet.

Now available in the Options menu – UI Scaling! Are you a 4k player with tiny user interface issues? Do you prefer your interface to be readable at distances greater than fifty feet away? Have you a desire to customize the scale to your personal preferences? Now you can! From the Options panel, open up Game Options, and choose Accessibility. Stay away from the red parts of the slider to keep things in the safe range for your display. But, if you are feeling adventurous, give it a try, go crazy! If for some reason you find yourself in a bad state, you can always reset – either from the options panel, or by using Ctrl+U to reset the scaling back to default!

We know you want to know EVERYTHING about what’s going on, so we’ve added the ability to show you the latest and greatest Sims content on the Main Menu. You’ll be able to learn about free content, check out the latest updates on upcoming releases, pore over the newest blog posts, and more!

We have updated the Holiday Celebration Pack with some new children and toddler clothing! If you haven’t already added the Holiday Celebration Pack to your game, click on the icon at the Main Menu, and download the free pack! From there, head on in to Create a Sim and select the Holiday filter to find the new assets! Children have a new male top, female top, and winter boots! Toddlers have a new outfit for males, a new outfit for females, and some shoes! Or open up the Styled Looks, where SimGuruMorgan created some great new looks with the content!

We have made the Hip Hop Radio Station available for everyone! This means that it is no longer exclusive to Get Famous. However, Get Famous specific music will still need Get Famous to be played.

We added the following songs as part of this update: