The Sims 4 Realm of Magic is launching next week, and you know what this means: a brand new patch to prepare for the new content! Configurable stairs finally arrived for The Sims 4, meaning you can finally make L-shaped stairs (and more) if you want to.

Time flies when you’re having fun! Can you believe The Sims 4 turned five years old already? Well, you better believe it, as EA is celebrating this anniversary by giving us some cool new goodies in the new free update for The Sims 4, such as a cool new patio set including a lounge chair. Make sure to update your game to receive the celebratory items.

Some of the items are highly inspired by muslim culture, welcoming even more diversity into the game. Players can now give their Sims a hijab or kufi and dress them with one of the new modest clothing options. Maxis worked together with a fashion designer & consultant and the results are stunning.

Watch our complete Overview of the September Patch!

Read the official blog about the 5th Anniversary 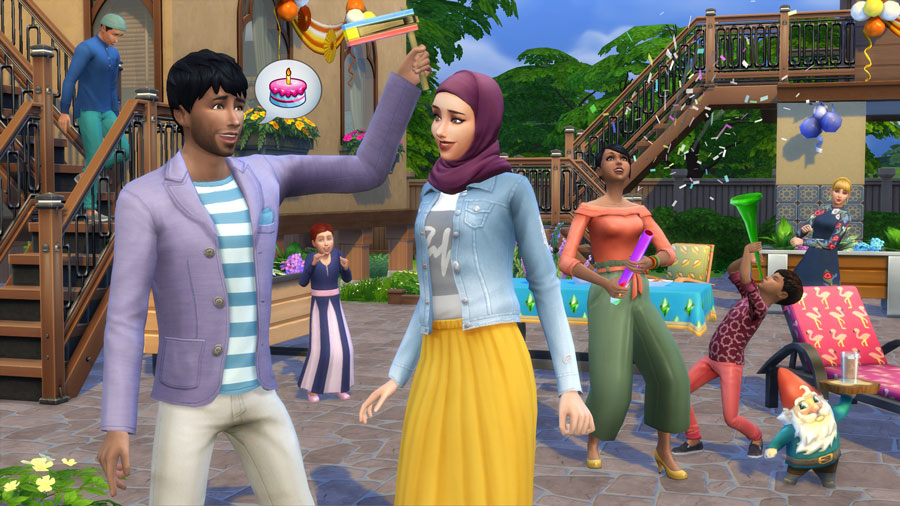 THE SIMS 4 IS TURNING FIVE

Happy 5th anniversary, The Sims™ 4 players! We’ve been through so much as a community and, really, we want to thank you for your continued support. You’re an inspiration to everyone who works on The Sims, and we feel lucky to have such a passionate worldwide community. It’s because of this that we’re so excited to share a commemorative update featuring patio furniture, configurable stairs, and clothing and objects inspired by Muslim culture. To get some insider info on the… Read more

Welcome simmers and aspiring spellcasters alike! While we wait a few more short days for Realm of Magic to release, you can pass the time with this fun update. Read on and you’ll find details of a long-requested Build feature that’s been added to the game. There’s also a whole bunch of new clothing and objects, both in recognition of The Sims 4’s 5th anniversary, as well as making even more simmers from around the world feel welcome within the game. And as always, a number of important issues have been addressed to make your experience that much better.

There’s magic in the air, and the candle summoning circles you’ve been sending us via Twitter in an effort to will new types of stairs into existence has worked! Configurable stairs have been added to the game, giving you the ability to create stairs that are L-shaped, U-shaped, and more! Excited to try them out? Simply place any set of stairs down in build mode, and you’ll notice a new widget that appears… it’s a box with two arrows attached to it. Grab onto that with your cursor and drag, and suddenly your stairs will be bent 90º! Keep dragging, and the stairs will bend 180º. Once you’ve bent your stairs, you’ll see another two widgets appear. A diagonal arrow above the newly-added landing will let you adjust the height of the landing within the staircase. A curved arrow at the base of the stairs will allow you to continue to rotate the direction of the stairs beneath the landing. For times when a single landing just isn’t enough, you can keep adding additional bends to your stairs–as long as they’re tall enough to have room for another one. I think that just about covers the basics; so get in there and try it out, experiment, and create some amazing new builds!

It’s already been five years since The Sims 4 released; whew–time flies when you’re simming! In celebration of this milestone, we’ve added a set of end-of-summer content so that your Sims can join in the festivities. Invite some friends and family over, fire up the grill, and enjoy a backyard get together with this new content. (FYI – the new stilted foundation is perfect for creating a backyard deck!) You’ll even spot some patterns with nods to famous icons of The Sims…

To help even more of our players express themselves and create Sims that are relevant to their everyday lives, we’ve introduced a set of Muslim-inspired clothing and architecture.

Previous ArticleNew CAS & Build-Buy Items Coming to The Sims 4!Next ArticleCollecting Familiars in Realm of Magic