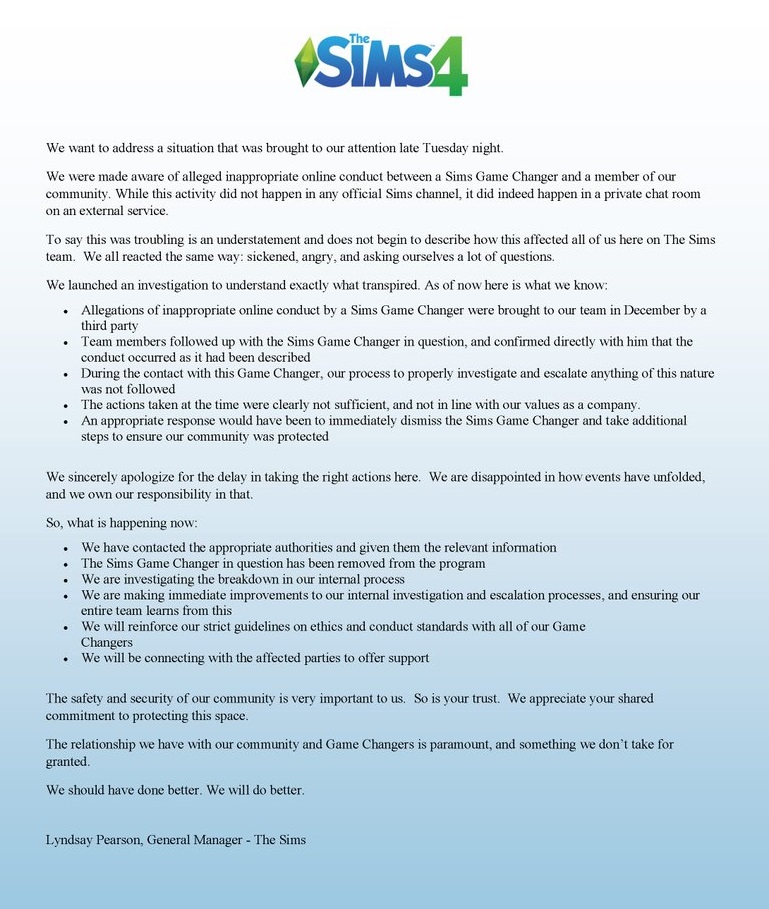 A few days ago many Simmers came to Twitter to express that an incident happened between an EA Game Changer and minor Male Simmers.

SimGuruLyndesy took to Twitter and wrote a statement about the incident.

Here is what she had to say:

What’s more damaging to the company and the minors who were affected by the incident is that many of them told the SimGurus back in December, but the SimGuru’s did nothing about the incident, which allowed the EA Game Changer to target more minor Male Simmers.

Thank you for this statement Lyndsay. Simmers, please understand that we (including me) are unable to comment publicly on ongoing investigations. If you are being harassed or threatened please report to the appropriate individual immediately. https://t.co/02sp7nH2nM https://t.co/FsTNB1MQnI

This didn’t make Simmers very happy though since they are still wondering why the Maxis team or the EA team could not take appropriate action to remove the EA Game Changer when many of the victims came forward back in December.

But with all the bad news, SimGuruLyndsay came back to Twitter to release an official Statement about the incident:

Please be safe when online Simmers and if you ever feel like you are being targeted by an EA Game Changer. Please don’t be scared to address it to the company or the SimGurus since we hope they have learned from their mistakes and will take action very quickly.

Previous ArticleSimGuruEmory Announces His Departure From MaxisNext ArticleOrigin’s Weekly Sale: Get The Sims 4 My First Pets Stuff For Only $5!