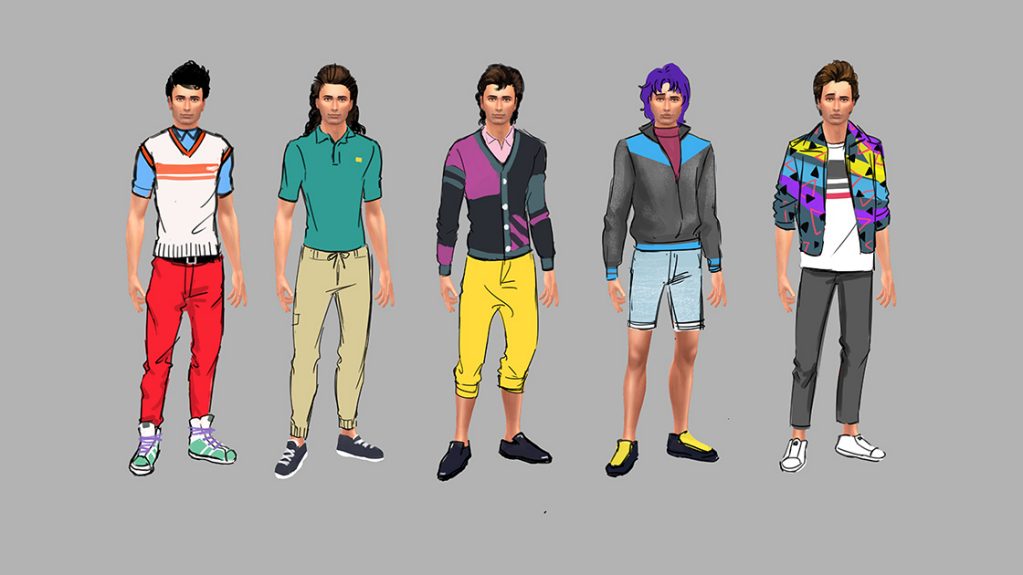 Learn how the Sims team worked closely with the community to create the first-ever community stuff pack.

Recently, Maxis asked the community to help them create an all-new Stuff Pack for The Sims™ 4. And the response was incredible!

We sit down with Associate Sims Producer, Graham Nardone (better known asSimGuruGraham) to learn more about the process and find out how working with the community makes The Sims better.

This stuff pack was inspired almost entirely from Sims community feedback. How did they respond?

The response from our community blew past our initial expectations. In less than an hour, we received tens of thousands of votes on the overall pack theme! We’ve always fostered direct lines of communication from members of our studio to all the Sims fans out there, but we’ve never had the opportunity to discuss upcoming content so early in development.

What is the overall theme and direction of The Sims 4 Laundry Day Stuff Pack?

When we first started discussing this project within the studio, we wanted to ensure this process represented the feedback our players have sent us in the time since The Sims 4 launched. Overall, Maxis is very engaged with our community on our official forums and social media, and we noticed players continuing to request certain themes that we had no plans to address within the near future. We thought those ideas would be a great starting point for players to rally around when selecting the theme of this pack. Out of the five proposed themes (Eco Living Stuff, Starter Homer Stuff, Arcade Stuff, Dangerous Stuff and Wedding Stuff) that players were able to vote on, Eco Living was the winner.

Had the “arcade” theme been selected by players, these vibrant ’80s clothing concepts were being prepared for the art style vote.

Out of the five proposed themes that players voted on, Eco Living was the winner. As further votes took place and ideas coalesced, we landed upon rustic furniture appropriate for a sunroom or mudroom, fashion in the style of country boho, and adding laundry as the new gameplay feature. 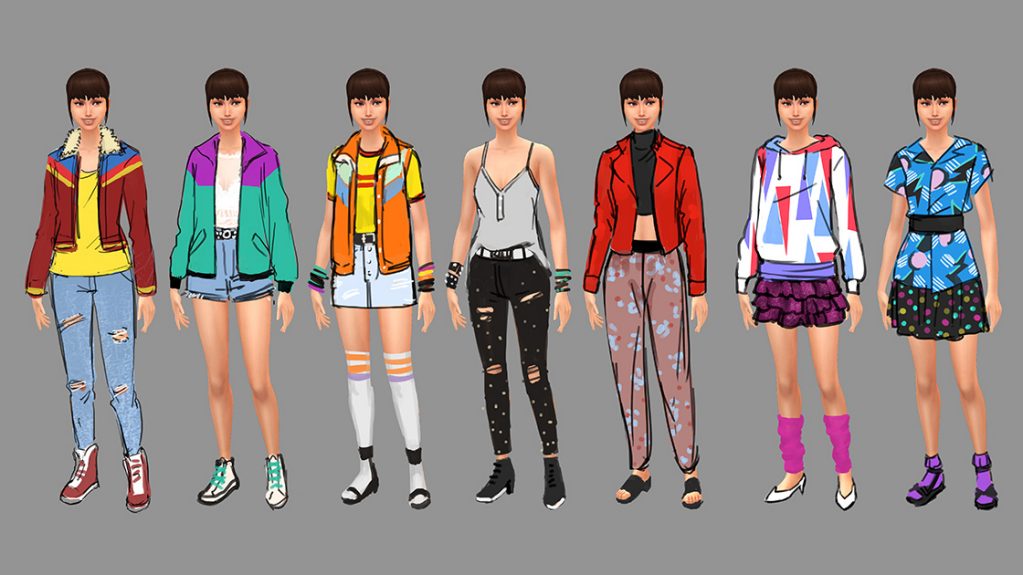 More concepts from the “arcade” theme.

What were some of the more interesting requests that came in from the community?

One of my favorites was seeing players debating the logistics of woohooing in a hamper or on top of a washing machine, and which one would be more practical to add to The Sims. Other players were requesting things like vacuum cleaners and lawnmowers as additional home chores to complement washing and drying machines.

“We’ve invited all of our players to have a seat at the table when decisions are being made.”

How did the team originally decide to work with the community on this content?

Back in 2012, I started thinking about a final expansion pack for The Sims 3 that would incorporate the best aspects of what excited people about crowdfunding: the opportunity for ordinary people to show their support for a project and influence what it would ultimately become. Those plans never went beyond the hypothetical, but there was a lot of promise in the idea. 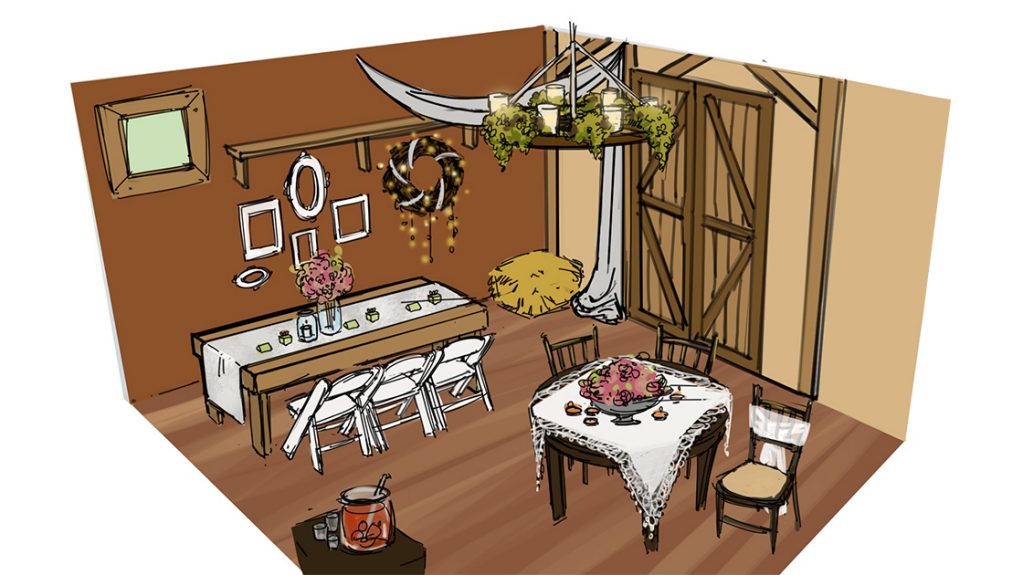 Fast forward four years to the 2016 Maxis holiday party: our executive producer Lyndsay Pearson chatted with me about bringing the idea back in the form of a Stuff Pack for The Sims 4. I leapt at the opportunity! Not only do I really enjoy chatting with fans of The Sims, but I have a certain reverence for the seventeen-year legacy of The Sims that is made possible because of our passionate fans. I think they should have a voice in the direction that The Sims games take, so it’s really exciting to include them in this pack as part of the history of The Sims. 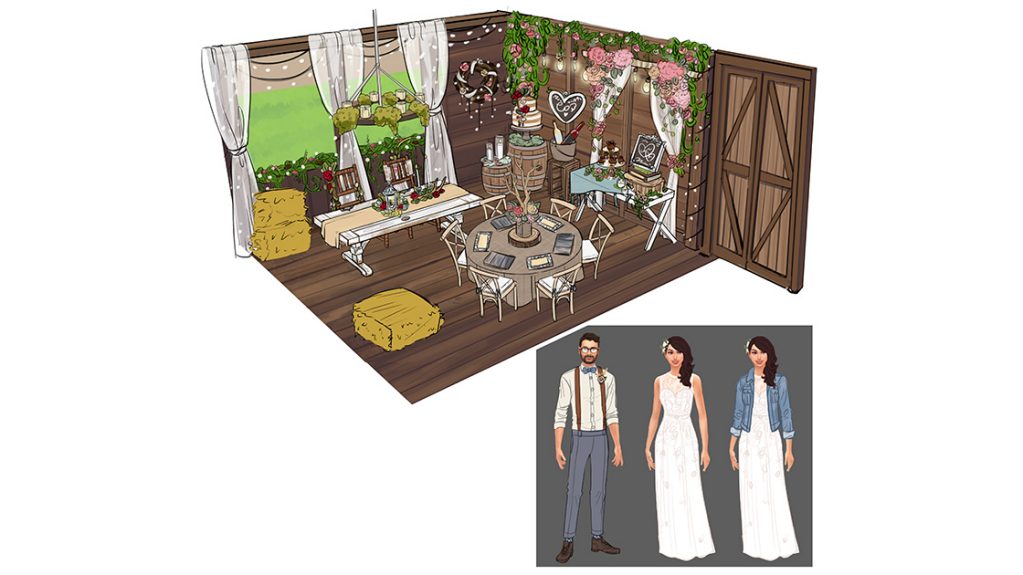 More concepts from the “wedding” theme.

What were some of the most-requested additions that made it into the Laundry Day Stuff Pack?

Laundry was frequently requested by our players, and it draws clear lines between the segment of people who play The Sims as a life simulation, and those who enjoy it as a video game.

Players who want a life simulation welcome a feature like laundry, as it’s something very relatable to our everyday lives. Others who want to “play” a video game wonder what purpose laundry serves, and how can it add to the fun they have with The Sims 4. Ultimately I think it highlights how The Sims appeals to a variety of players who have different motivations, and how we as a studio can use Stuff Packs to serve different segments of our audience. 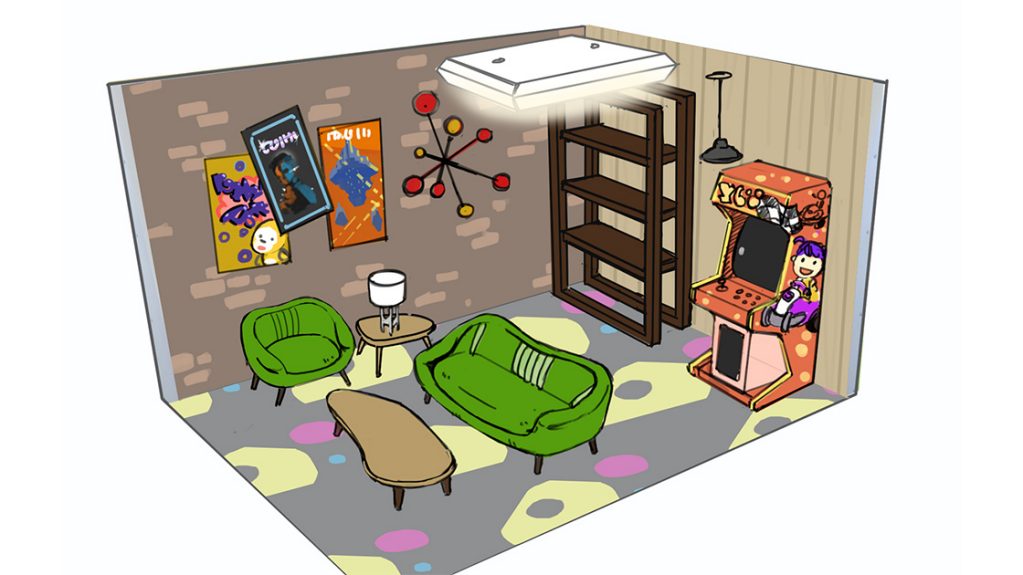 Had the “arcade” theme won; players would have voted between American ’80s (above) or Modern Japanese (below) influenced arcades in the Art Style vote. 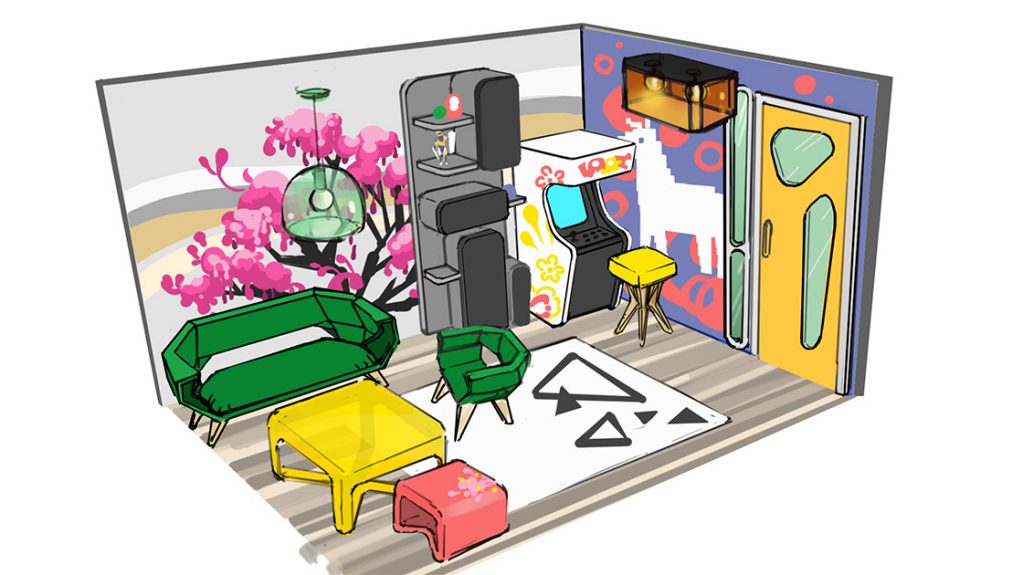 How important is working with the community for The Sims?

Staying closely involved with our community is so integral to what we do at Maxis. Something I really appreciate about working here is how people throughout the studio can influence our creative process, because they bring different diverse backgrounds that make us consider life from a variety of perspectives. In the same manner, The Sims has millions of fans, and their shared life experiences are vital for us to consider when making an inclusive game like The Sims. Any member of our team can choose to become what we call a SimGuru, that is – someone who directly engages with our players on social platforms, and has meaningful conversations with them about the work that they’re doing. Having this unfettered access between developers and players is pretty unique in a AAA studio, and the dialogue we have help us continue to make great games. Many of the players we speak to have been playing The Sims since it first launched back in 2000, certainly longer than I’ve worked on it. They’ve seen this game grow and change over time, and have important insights to share about where it could go in the future. 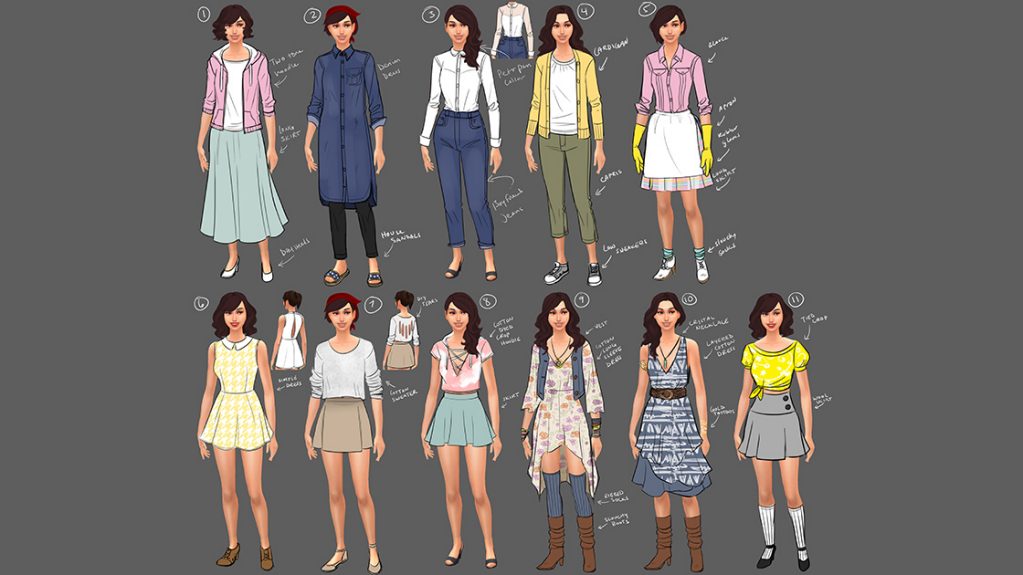 What part of this process has you most excited?

I’m personally very interested in providing a genuine behind-the-scenes view into game development here at Maxis. With this project being announced so early, we want to navigate each phase of development and provide context into everyday decisions. So far, that’s involved discussions about our pre-production process, in-depth explanations of in-game assets, and the specific milestones along the way.

For our players who want to engage in the development of this pack, we’re planning on discussing and showing more aspects of development that just aren’t typically shared. Be it via blogs, posts on our forums, informal Q&A sessions on twitter, or mid-development livestreams, we have a whole lot more in the works! 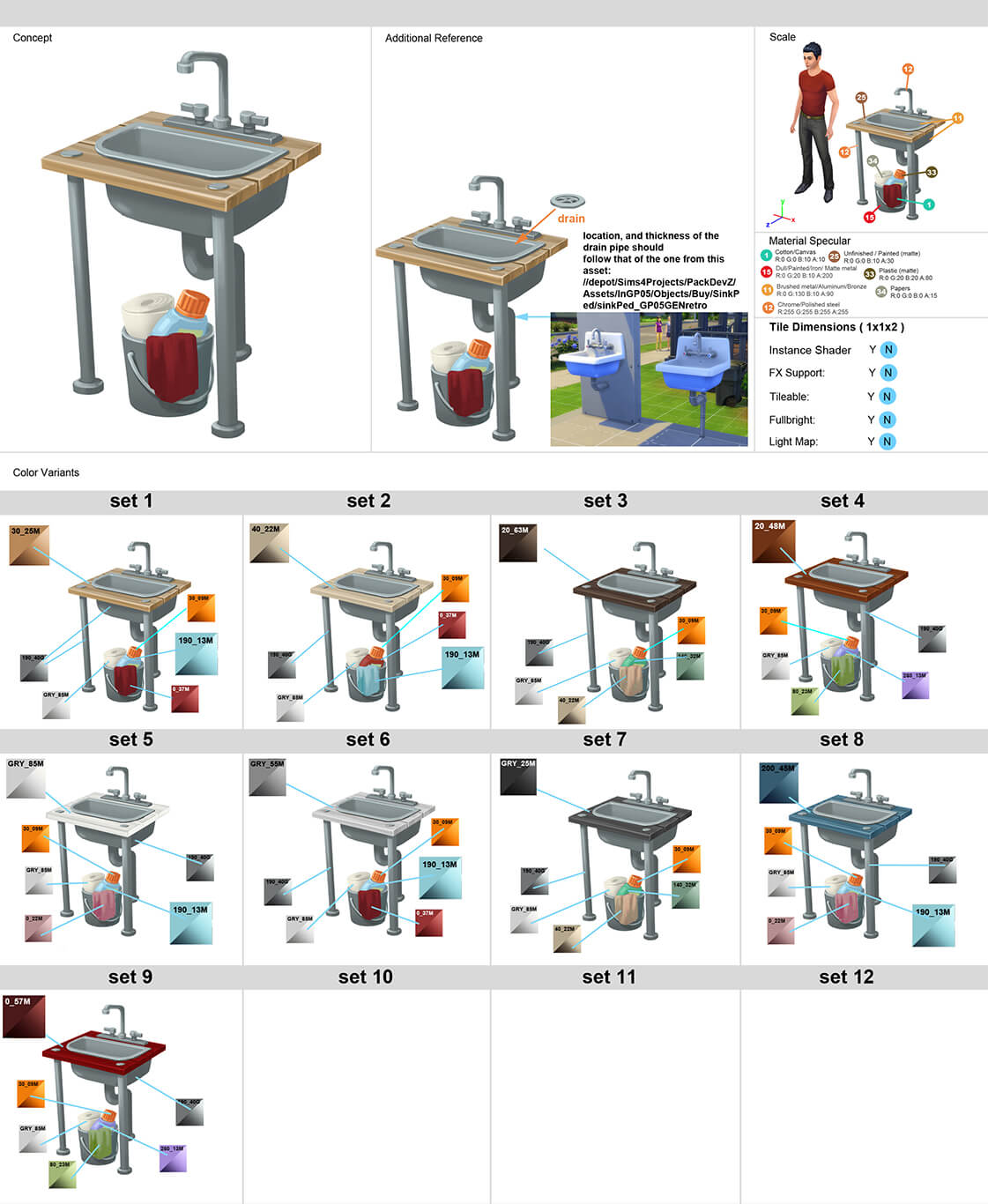 The color guide for a sink concept.

In looking at how the content evolved from concept art through final renders, what were the big design choices that the team made?

Most of the design choices that we’ve made were to set the stage for our players to make a final decision. Something we’ve stressed throughout this project is that we wanted this process to be an authentic representation of how we develop Stuff Packs. We’ve invited all of our players to have a seat at the table when decisions are being made that will influence the next stages of development. The votes that players are participating in are the same questions that we ask ourselves. 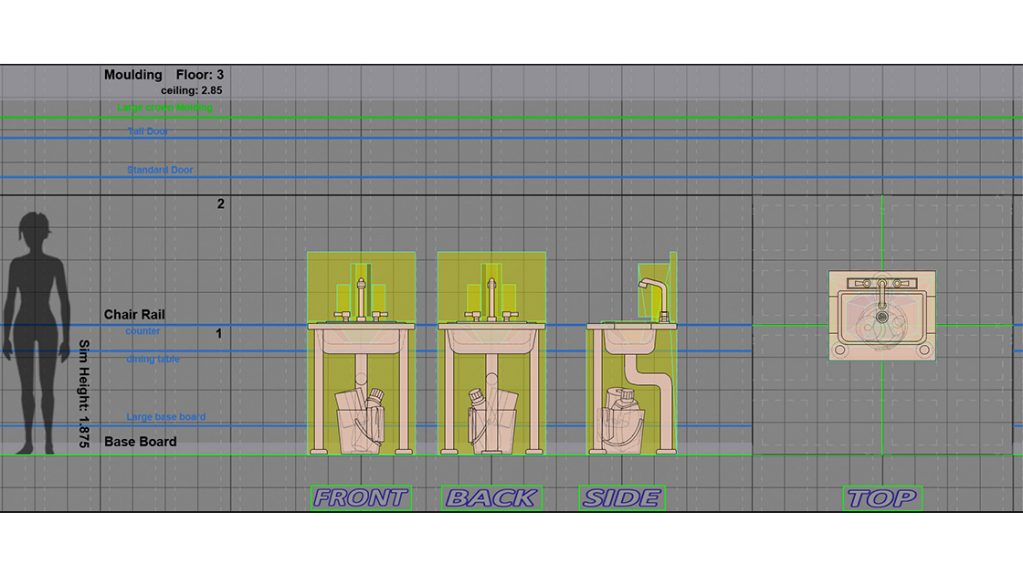 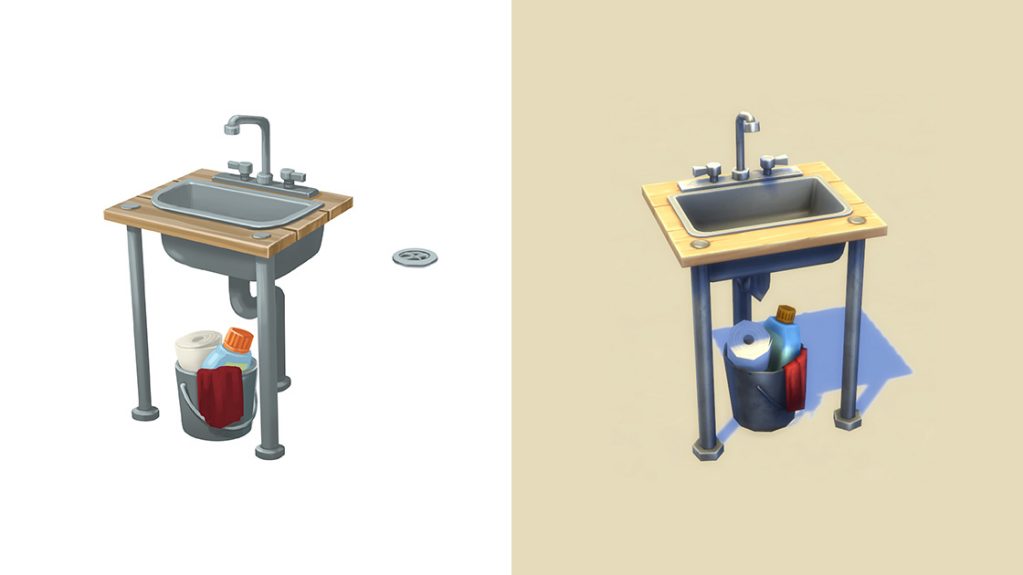 A sink goes from initial concept art, to color guide, to orthogonal drawing, to final asset.

What are some of the small details in this update that Sims players will be excited about?

Players will appreciate the attention to detail in these laundry features, some of which is influenced by player feedback that we received over seven years ago! Players shared a lot of positive comments about laundry in The Sims 3, but one critique we commonly received was the requirement that your Sims have a hamper in every room, or they’d end up throwing their clothes all over the floor. That’s something we’ve addressed this time around.

Another thing we hear often is that players in The Sims 4 are very conscious of the amount of space objects can take up, so we decided to create our washer and dryer machines so that they can be stacked – perfect for Sims who are living in an apartment in the world of San Myshuno.