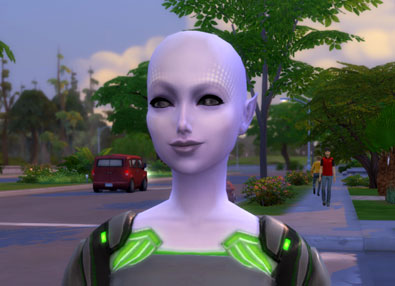 The Aliens are added with the expansion pack The Sims 4 Get to Work. This will give you a lot of new options like Alien Abductions, visit the Alien World Sixam, or add Aliens to your household. There is even an option to get your male Sim pregnant if they have been abducted by Aliens. Read up about all the things there is to know about Aliens.

With the Sims 4 Get to Work there is a chance that your Sim will be abducted by Aliens!

How to increase your chances to get abducted

The Sims who can be abducted are young adults, adults and elderly. Only the male Sim gets pregnant. Aliens can also be abducted by Aliens in The Sims 4 Get to Work. You will have the most chances of being abducted by working as a Scientist or as a Doctor. Try to make contact with the Aliens by finding out that someone in the neighborhood is an Alien, try contacting them through the Satellite Dish from the Scientist career or use the portal to make contact or go to Sixam.

It doesn’t matter where you are when they try to abduct your Sim, they will walk outside to find out what the mysterious light comes from. With the Doctor career you will be able to recognize Aliens by using the X-Ray on patients. Got another tip for us? Please leave a reply.

How to prevent abductions and male pregnancy

There are also ways to prevent abductions if you don’t want any more male pregnancies. The first option is to get a Satellite Dish from the Scientist career and the second option is by using cheats.

This will keep your Sims safe for the next 24 hours. After that you need to put the Satellite dish on again.

Send back unwanted alien babies
If your male Sims do managed to get pregnant with an unwanted Alien baby by abduction you can send the the baby back to Sixam after your Sim had the child. Click on the baby and choose ‘Send to Homeworld’. This can still be done when the baby grows up. You will also lose the friendship with the Alien, it’s like you deleted them from you entire game.

Learn more about the Aliens in The Sims 4 Get to Work.

How to detect Aliens in your Neighborhood

Get an Alien Sim in your household

You can make Aliens directly in Create a Sim, you can build up a relationship with them and add them to your household later or your male Sim can be abducted and come back pregnant with an Alien baby.

Get your Sim pregnant with an Alien baby

Only male Sim or male Aliens can get pregnant with an Alien baby by abduction. Also your male Sim can breastfeed the baby when it’s born. These are the combinations to get an Alien baby in your household.

Alien genetics is something interesting. If you get hybrid babies they mostly likely get an alien skin tone and have normal hair. When you get a baby that is 100% Alien they will still be bald when they grow up. The genetics from the Alien disguise will also be transfered to your Sims’ child.

There’s an option to change the clothes from an Alien to more normal clothes Sims wear. Let an Alien go to the Retail Shop where they can buy clothes. If an Alien bought an outfit from a mannequin they will be able to wear them. You can also place Mannequins on your home lot and dress them. You are able to purchase it on your own lot but only adult can do that, children have to go to the retail lot.

There are some things you maybe didn’t know about the Aliens in The Sims 4.