It has been a week since the first trailer of The Sims 4 Realm of Magic came out. The video provided us with quite some clues about the new content, but during the week more information has come to light. SimGuruRomeo has been tweeting actively about the pack and SimGuruNinja & SimGuruHouts shared some cool new stuff too, so let’s go ahead and look what they had to share this past week. 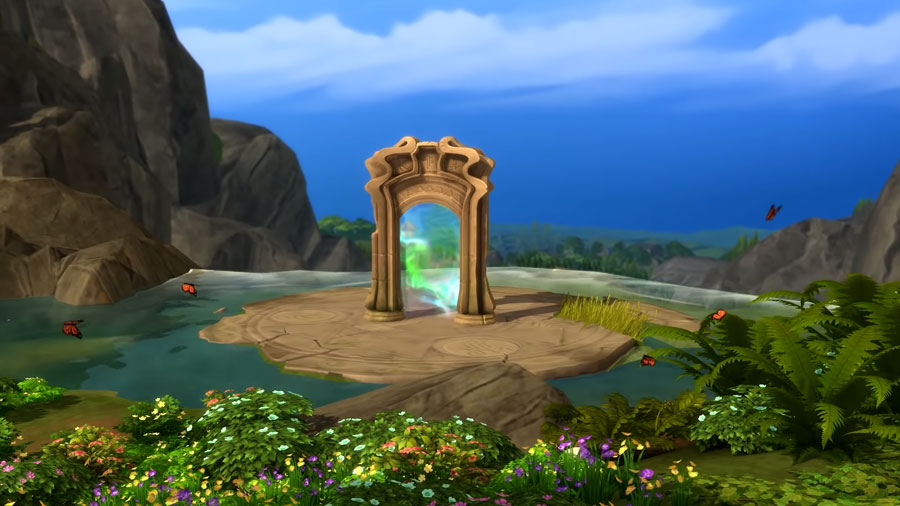 A whole new world… or two!

We already knew The Sims 4 Realm of Magic will add not one, but two new worlds to your game; The residential world Glimmerbrook and the enchanted Realm of Magic. Glimmerbrook will be a whimsical little town, with five lots for you to play around with. You’ll start out with one empty lot, a starter home, two new households and a public venue. Unlike StrangerVille, you can opt out of the peculiarities of the pack as Glimmerbrook itself is just a regular small village to live in.

The town is located in the woods with multiple waterfalls and other beautiful scenery. It seems to be similar to Granite Falls, but residential instead of a holiday destination. Simmers who have The Sims 4 Seasons installed will be able to experience all four seasons to the fullest as Glimmerbrook will have its own climate. SimGuruNinja shared this beautiful shot of Glimmerbrook during the winter.

Winter in Glimmerbrook is a magical time!
(Realm of Magic + Seasons) pic.twitter.com/hmIKqS3tnV 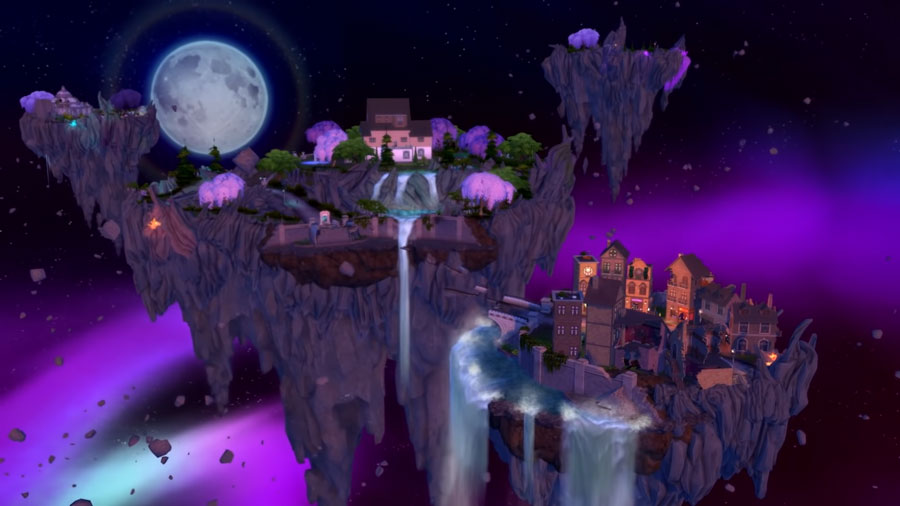 Sims will be able to access the secondary world, the Realm of Magic, in multiple ways. Go through the portal in Glimmerbrook or use a teleportation spell to travel. Or if you feel like it you can Bubble Hearth by using the Glimmerstone in your Sims’ inventory. Unplayed Sims will be able to use their magic here. Outside of the Realm it’s only up to the player when and where Sims will use magic abilities; We don’t want to alarm the muggles. Unless they enter the Realm by themselves, then it’s their responsibility.

The Realm of Magic exists of one lot, which you’ll be able to edit via the bb.enablefreebuild cheat. The rest of the world is purely an environment to play in. The Realm exists out of a couple of intriguing places, one of which will be full of interesting new collectibles. It’s a very unique world, unlike any we’ve seen before in The Sims 4. What’s interesting about it is that it seems to be located in a void-like dimension, causing it to be unaffected by any seasons and it even has its own day and night cycle.

Let's all just calm down for a minute. pic.twitter.com/2REuE1joyU 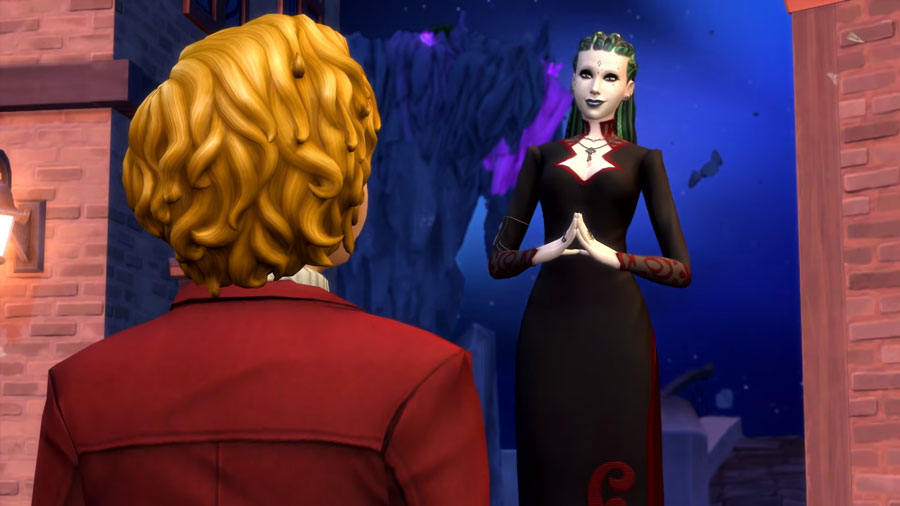 How to become a Spellcaster

There will be only one new occult in Realm of Magic called Spellcasters, so no playable Fairies or Werewolves. You can become a Spellcaster in several ways. The easiest way is to create a Spellcaster in Create a Sim. Here you can also give them two new Aspirations, one focused on Spellcasting, the other one focused on Alchemy. Being a Spellcaster will be a lifestate similar to Vampires and Mermaids. Sims will not be able to become a hybrid. Unlike previous occults, Spellcasters will be the first without the ability of a second “form” or appearance.

Sims can also be born as magic users. While they won’t be able to do much with it until they’re teens, it is said that kids are not able to completely comprehend what magic is about. There will also be a new trait Magical Bloodline which will allow them to use magic later in life. Sims coming from multiple generations of Spellcasters will be able to get little bonuses. Whether or not the new trait means Sims will be a Spellcaster automatically is still unknown. Maybe it will mean they’ll just have the potential to become the occult eventually, but first will have to activate their power… I’m guessing it will be something like that.

If you want to turn your existing Sim into a Spellcaster you can ask one of the Sages for the Right of Ascension. Each Sage will represent a style of magic: Practical, Mischief or Untamed. You will be able to learn all the styles on the same Sim, mix up the styles or just go with one. Use a wand or casts spells by hand, it’s all up to you! 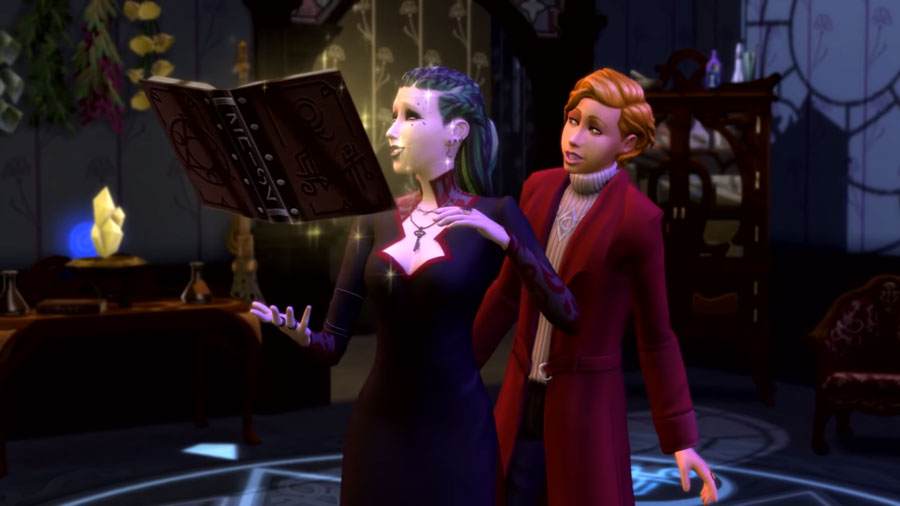 Use your Magic wisely

Another style of magic will be Alchemy, or Conjuring Potions if you will. In order to make potions, you will need a cauldron. There will be two options to pick from in Build & Buy, one with regular fire and one with magical fire. The cauldrons will be usable Off The Grid and you can even use them to cook. Each time you create potions with the cauldron you’ll receive a batch of 4 bottles. In order to make them you will need to collect the two new plants: valerian and mandrake root. You can find these in the collectibles area in the Realm of Magic, but probably in Glimmerbrook too, but the latter has not been confirmed.

Magic will not be a skill, but will instead be a similar system like the Vampire Powers. This means you’ll be able to pick your customized perks and curses. And remember the levitating spellbook? Each Sim will have their own grimoire to log their spells and potions. In total there will be 24 spells, 15 potions and several curses for your Sims to learn.

Who's pumped for Friday? pic.twitter.com/4gZ9p6xZq7

To name a few examples of what you can expect: you can craft a Potion of Immortality, multiply items with a spell, cause fires, or even use a transformation spell. Be careful where you will use your magic in front of other Sims, outside the Realm of Magic Sims might not react very positively to your abilities. For players with The Sims 4 Get Famous using magic will also influence their Sims’ reputation.

Unlike Vampires, Spellcasters won’t have to pick between weaknesses, but they will obtain up to three curses instead. Your Sim will get curses by failing feats of magic, so your magic will be able to backfire. Luckily there are a couple of ways to dispel curses off your Sims. However, this doesn’t mean using magic can’t harm the Spellcaster, as it can become lethal if you push your Sims’ abilities too much. Oh well, at least they’ll have a cool new gravestone/urn if they do happen to overwhelm themselves too much. 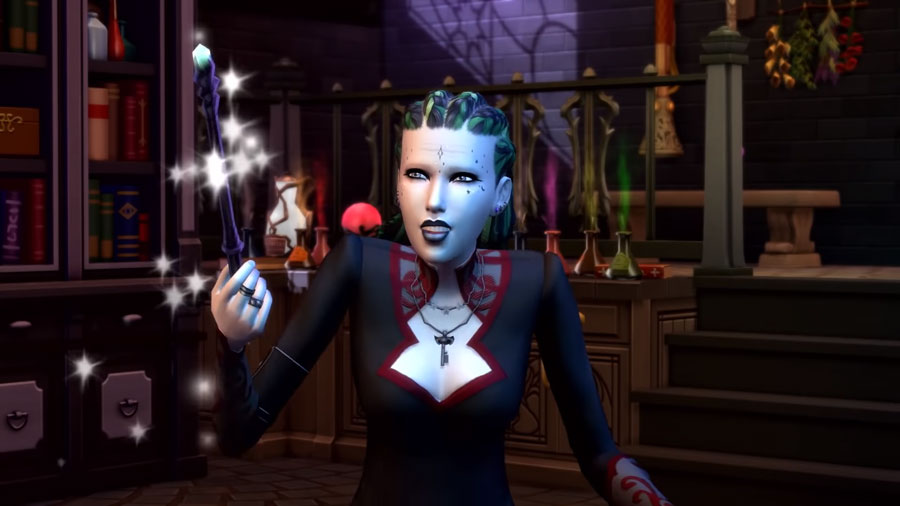 The right stick to do the trick

As mentioned before Spellcasters are able to use magic in several ways. Whether or not you use a wand is completely up to you. There will be a nice variety of wands to choose from. The appearance of the wand will not influence the power of the user. So no matter if you want a twig or a fancy bejeweled stick as your wand it will not make your Sim a better Spellcaster. Wands can be displayed in a special case.

You’ll also be able to pick from a variety of brooms and fly them anywhere. Make sure you put the purchased broom in your Sims’ inventory and make it the preferred mode of travel. I reckon this will be similar as the bat and mist form for Vampires. Store your broom(s) in your house by mounting it on the wall. 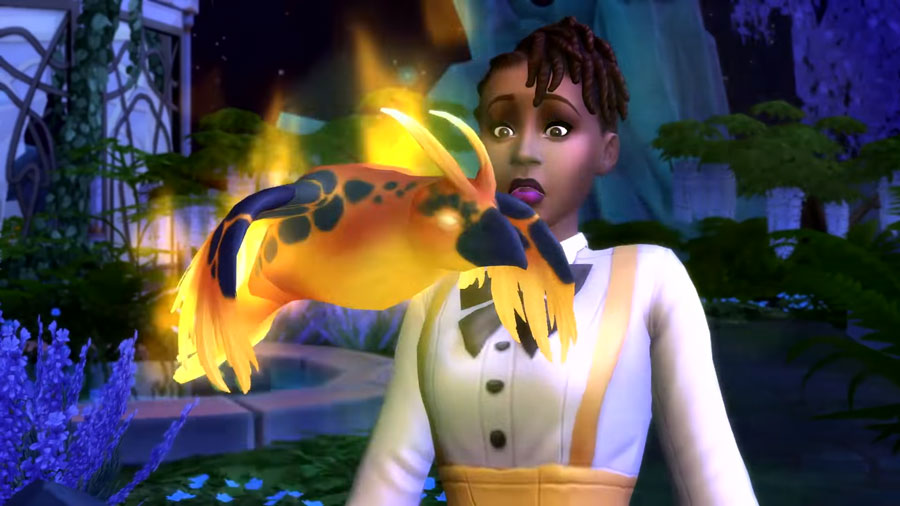 Something’s familiar about this Familiar

Spellcasters can either purchase or collect Familiars to accompany them in the Realm of Magic. While a Spellcaster can have multiple Familiars, only one can be summoned at a time. Your Familiar will be linked to a crystal ball, much like a Pokéball (but way more comfortable according to SimGuruRomeo), where it will be stored until you summon it again.

Familiars will function similarly to the streaming drones from The Sims 4 Get Famous. Once they’re summoned they’ll follow your Sim around and aid them. They help your Spellcasters conserve the Magical Energy and don’t chime away from protecting their partners from certain death.

Why anyone would think a Leafbat is a better familiar than a magical flaming Skull is beyond me. They are kinda cute though. pic.twitter.com/TsS9b5IKe3

There is a wide assortment of Familiars. While Fairies have not become a playable occult (yet) they can accompany guide your Spellcasters as a Familiar. You can pick mythical Voidcritters like Veild (a cosmic void creature) or go for something more regular like a crow or an owl. As you can name your Familiars, you bet I’m gonna get an owl called Hedwig!

Players who have The Sims 4 Cats & Dogs installed might be pleased to hear that their household pets can also become Familiars, making them look all sparkly and whimsical. There are a few new interactions for pets as well, such as the ability to gather magical ingredients for you. As Familiars normally don’t have needs I’m pretty sure cats & dogs will work slightly different from the other Familiars.

The official The Sims Twitch channel will be showcasing the pack during a livestream on September 6th starting around 8PM CEST (11AM PT).

Previous ArticleGive your Sims Memories in The Sims 4Next ArticleNew CAS & Build-Buy Items Coming to The Sims 4!