During a private livestream to Game Changers we were able to check out new gameplay footage of The Sims 4 Island Living. We can’t share visuals from this stream so I’m trying to explain the features in the best possible way I can.

My first thought when they opened the livestream in the new world Sulani that is was jaw dropping beautiful. The detail the world provides is amazing! The plants, trees, beaches, ocean and textures are very well made. You will find a total of 14 editable lots (yes, also a 64×64 lot size!). Some of them are water lots as they called it.

You can visit several places like an active volcano, a peaceful waterfall where you can woohoo or take a shower for example.

Be careful when you live on a lot with the vulcano lot trait, sometimes the volcano erupts on your lot shooting lava bombs. Your Sim can’t be hit by them but they can burn when touching one of the lava rocks and eventually they can die. Once the rocks cooled down you can also use them as decoration or break them open to find hidden minerals.

Great news! Some lounchechairs that were shown in the official reveal trailer will be available in the next update on June 18! You can use them next to your pool in the base game without having to own Island Living. The Sim can use the sunbathe interaction on the lounge chair, but also on the new towels. You can even choose to sunbathe naked! Your Sim will get a tan based on the clothing your Sim was (or wasn’t) wearing when sunbathing. BUT… Keep an eye out for pranksters, as you might end up with a rather funny look! 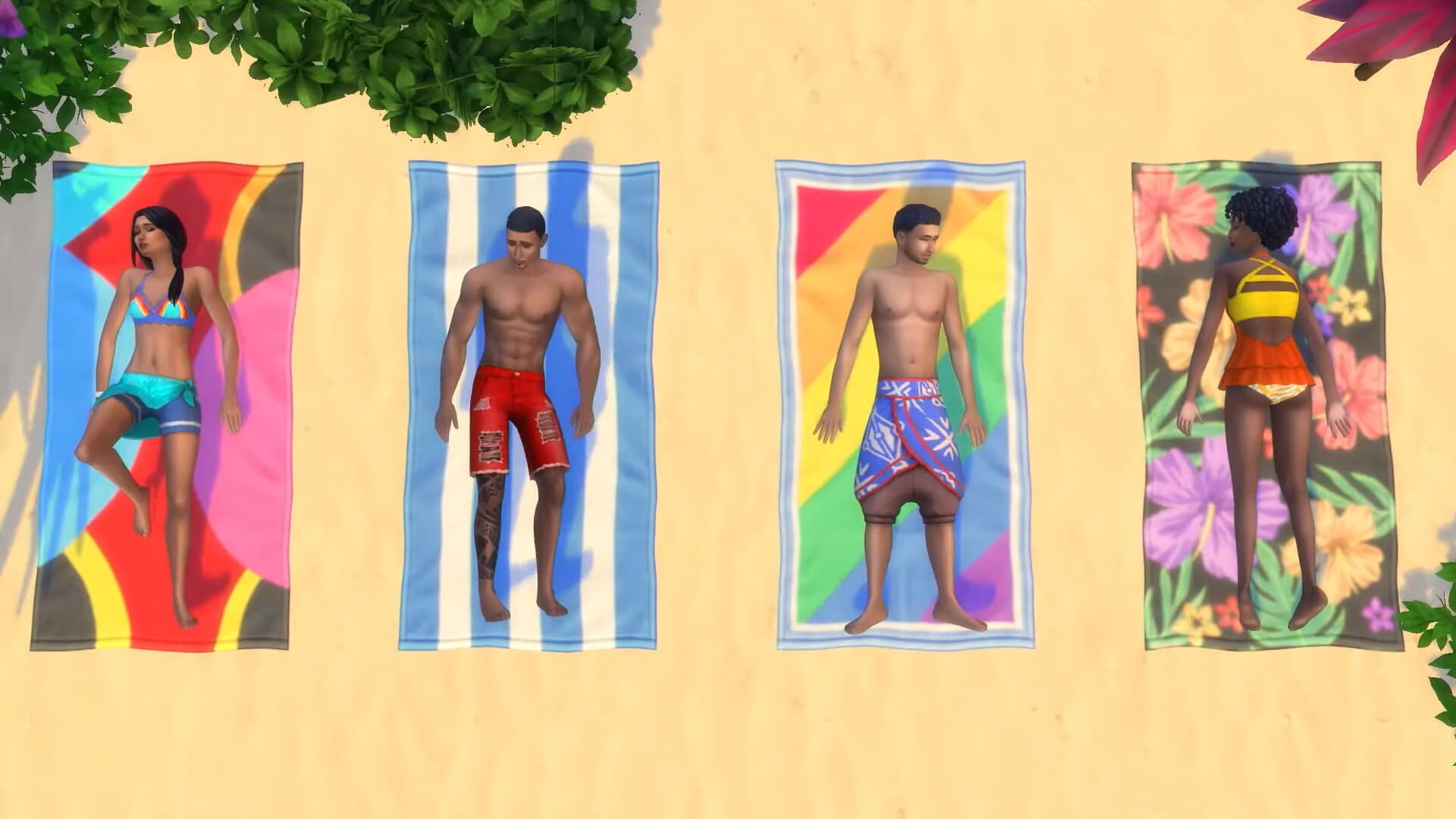 One of the awesome features is the pit barbecue. You can create special dishes that are only available in this expansion pack. Your Sim will cover the pit with palm leaves to cook/steam the dishes.

The object where I totally flipped was the amazingly cute floating whale lounger. They’ve also added a normal one and a pizza shaped one! While on the float loungers they will slowly drift around on the water. It comes in very handy to take a floating lounger with you when exploring the ocean because you’ll have the option to nap on it. 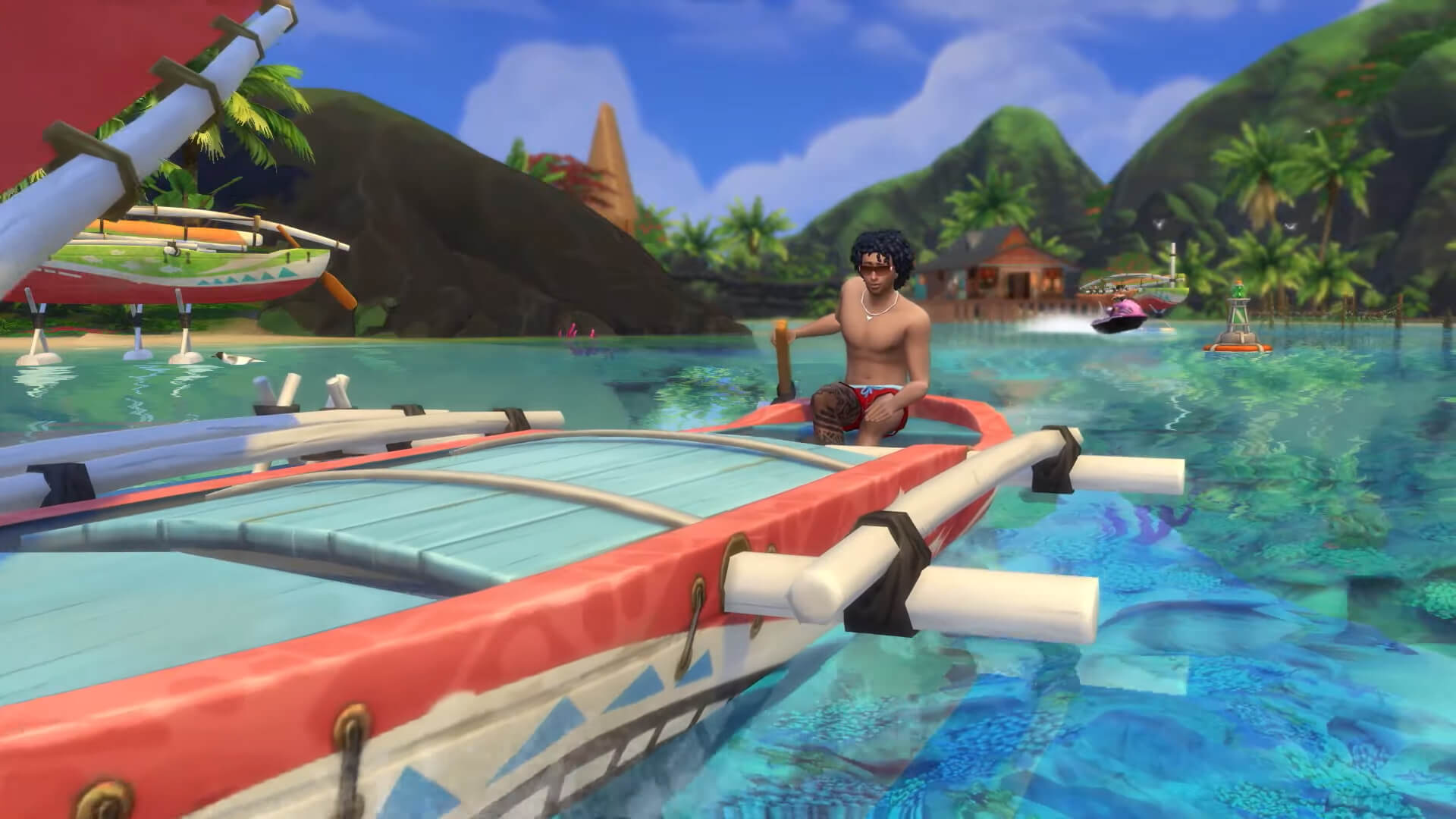 You have more ways to travel over water. You have a canoe and a (shark themed) water scooter. You can take them far away in the ocean to deep waters. With the water scooter you’ll be able to do tricks and on the canoe you’ll have a place to rest when your far away from your home at the ocean and even go fishing. Fun fact: You can also name your boat! The new part time jobs are: Lifeguard, scuba diver and fisherman. These teen jobs are also added for the adult Sims, so your Sims will be able to make some money while on the island.

The new active job is the conservation career. There are 3 levels of conservation and the career will help you guide through the conservation while you progress in your career. The best place to perform conservation actions is the natural island as there’s much to do over there. When you maxed out conservation the island will change in a very positive way. Expect bioluminescent algae to appear at night and more turtles and butterflies! 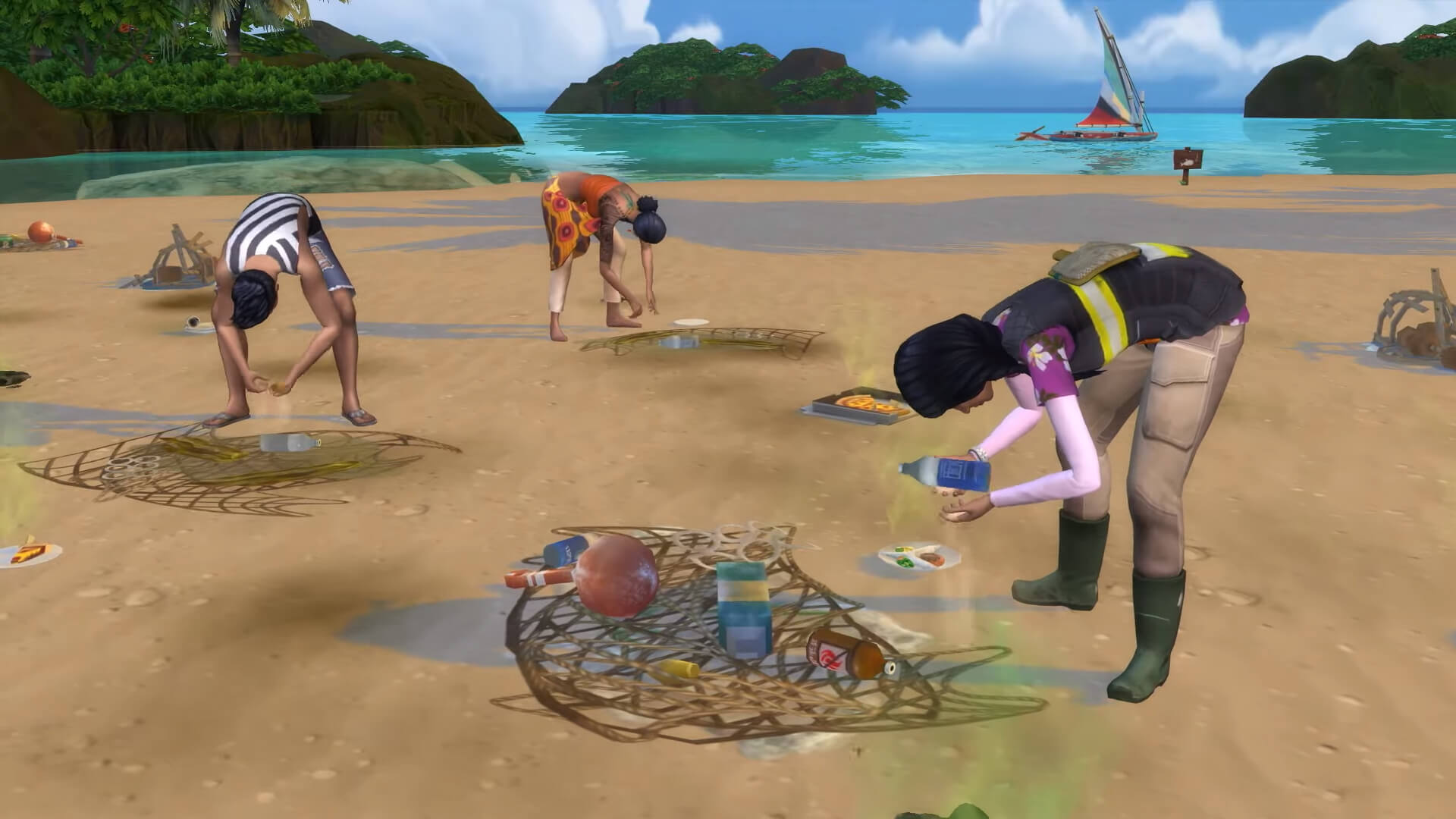 Swimming is exclusive in Sulani but they did not close the door to think about other places to make swimming possible. But they’ve also announced that dogs can swim in the ocean too and there are little shallow places in the ocean where toddlers can sit and splash.

To increase your swimming speed and unlock new swimstyles you’ll have to level up your fitness skill. If your Sim is stuck on a low level fitness skill while swimming there is a possibility to get tired fast and you might get a cramp or a sudden chill.

This interaction can be activated with a ​​buoy. They can snorkel and dive together as a family in the ocean. You can also take pictures of the water life and coral to take home with you. There is even a chance that you can find a treasure while diving. This will also help you increase the fitness skill that is important for better swim skills. 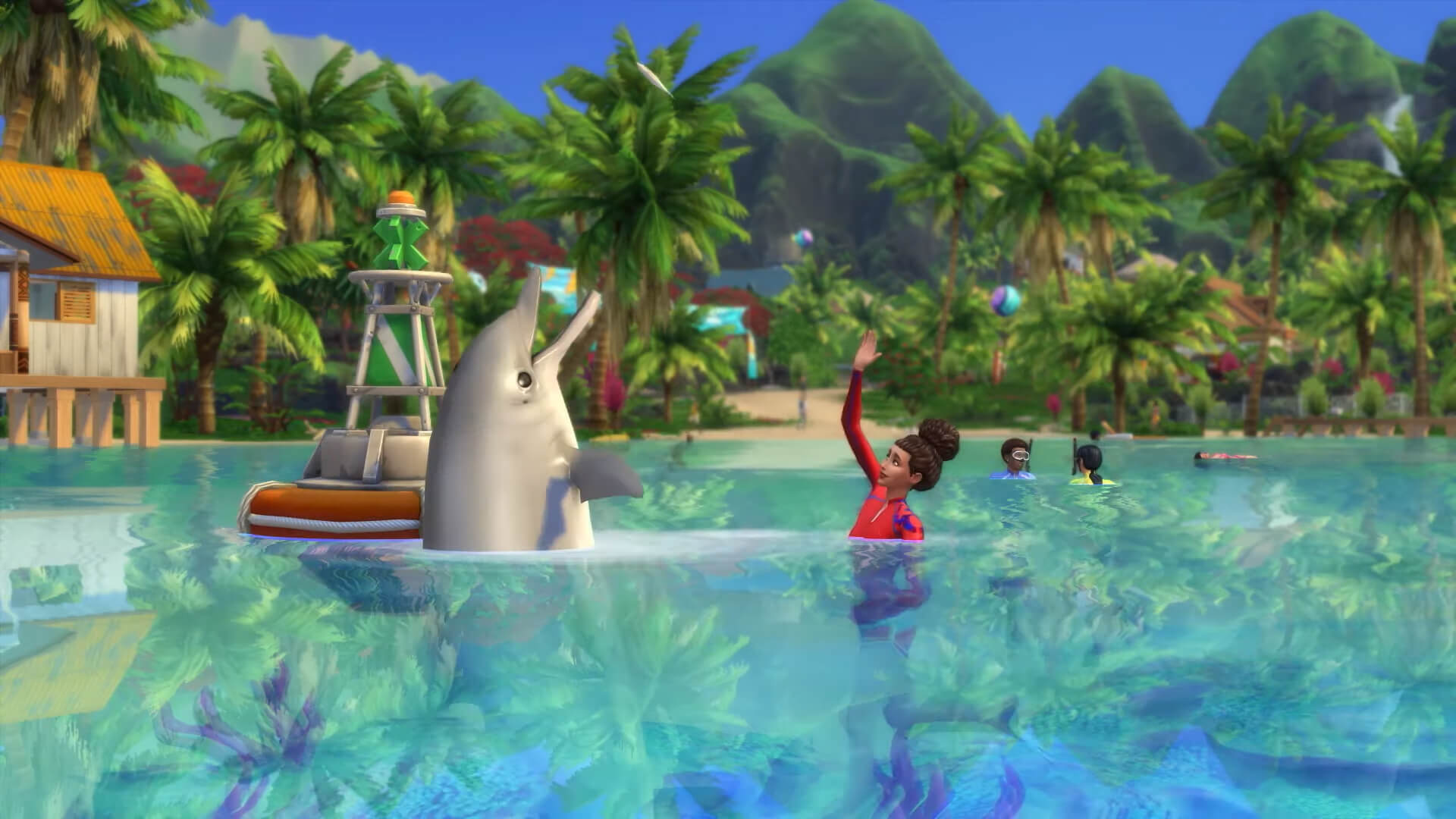 The dolphins are an amazing addition to this expansion pack. Once you befriend them they can do tricks together with your Sims like playing fetch, dancing in the water, talk with them, feeding them fish you caught earlier and I thought I got a hint about a faster swimming option from the livestream. It would be amazing if you could lift by holding the dorsal fin of the dolphin.

Dolphins can be your buddy, this unlocks the option to name them!

Fun fact: They also happen to make the cutest sounds in the game!

Be careful in deeper waters, your Sim can run into sharks! They will try to drown your Sims so when a shark appears, try staying out of the water for a while.

Turtles can be seen all the time, but will increase with Conservation Level, and there may be a special Hatching Event.

We’ve discovered a lot of new information about mermaids during the livestream. Mermaids are the new occults and will be added into Create a Sim. You can start your game with your own mermaid Sim! Being a Mermaid can be undone through special gameplay, which is the same way a human Sim can change into that occult. Look out for special kelp.

The official name for the mermaids and mermen are Merfolk. Merfolk don’t need hygiene but they will have hydration instead. You can fulfill this by swimming, bathing or drinking water. When a Merfolk Sim takes a bath the tail will be visible.

Mermaids and mermen have special powers. If you have Seasons your Merfolk have the power to summon thunderstorms! Other than that they can prak other Sims, sing siren songs and use a special mermaid kiss in the water.

Can kids also be Merfolk?

They can but they won’t grow a tail until they are teens. You can make kids Merfolk through CAS or through pregnancy from Mer parents. 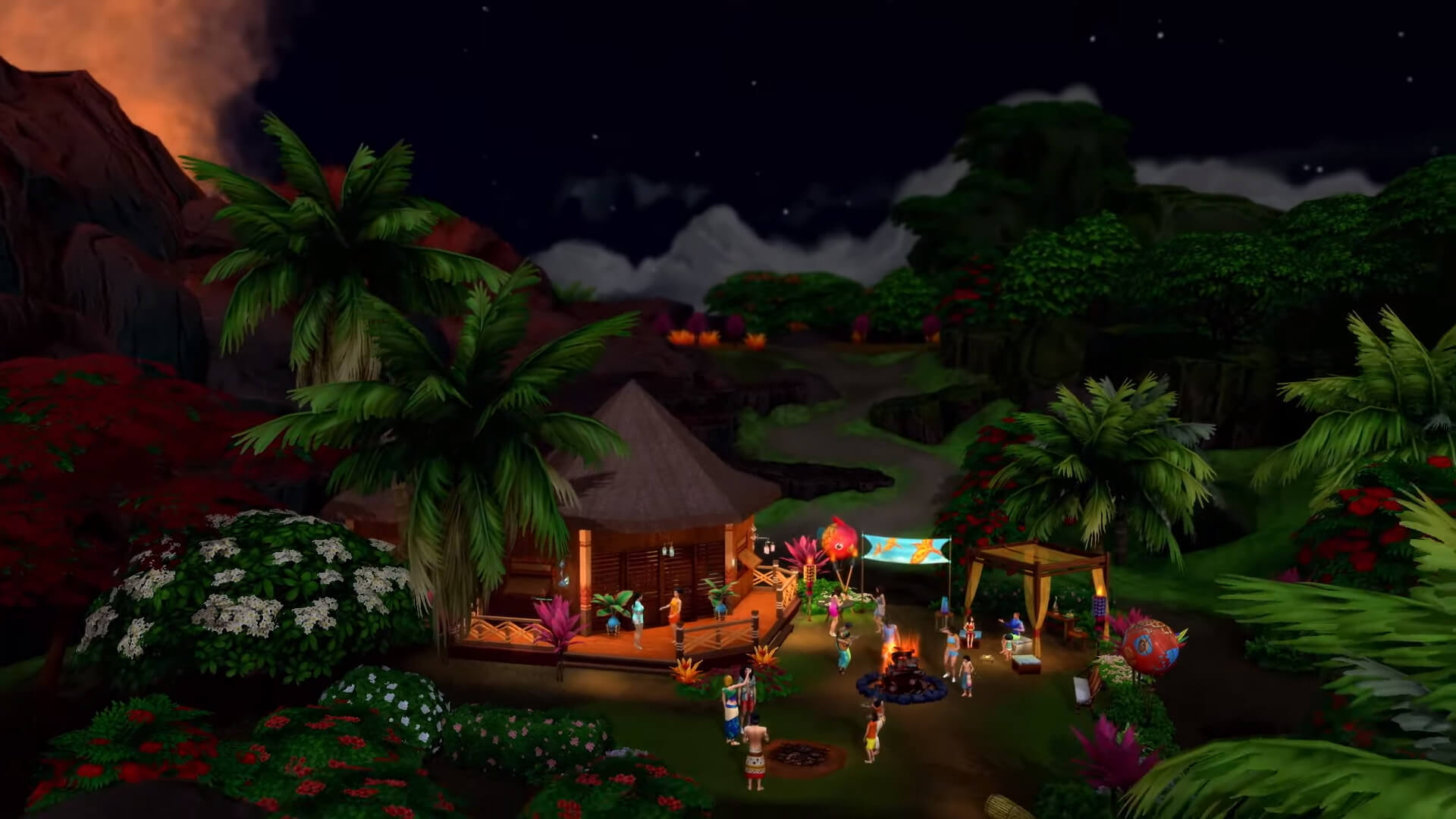 There are events that happen every day of the week. You can have a fishing tournament, beach campout or even a potluck. They showed us one of the events and that is the Island Celebration event. These events will include new food stalls, wedding arch made with palm leaves, classic fire pit and a pit barbecue for example.

I’m so happy with the new object coming to The Sims 4 in this expansion pack. A lot of tropical items are included! Not spoiling too much about it but I’m really psyched about the curtains, plants, glass floor and the amazing build objects! A lot of new clothing and styles are added in this expansion pack. Toddlers will get different colors for their diapers (this will be added in a free update). A new set of teeth (shark teeth), pupils with many different colors, 4 different tails for Merfolks and much, much more.

Fun fact: There’s a trait randomizer in game when the next update hits!

Extra in the next update

On June 18th, every Simmer who owns the base game can now live off the grid with their Sim! No power, water and limited internet but also no bills!